UFC veteran Court McGee produced an incredible show of bravery after having his nose gruesomely disfigured by an uppercut from Carlos Condit, fighting through the pain to reach the end of the scrap against his astonished opponent.

Tough welterweight McGee suffered the horrific injury at the end of round one in the clash against Condit at UFC Fight Island 4, when his rival sent him to the canvas with a shuddering uppercut.

Stunned viewers noticed that McGee had reset his battered nose, which was clearly out of position as he sat in wait for the second round, before fighting on through the agonizing injury to lose by unanimous decision.

“I set it moments after this in the second round,” confirmed “The Crusher”, replying on Twitter to one of the many photos of his misfortune. “I felt that it was crooked after I stood up.”

I set it moments after this in the 2nd. I felt that it was crooked after I stood up. #UFCFightIsland https://t.co/imswSnGTHR pic.twitter.com/De8lcMNMGN

Condit marveled at McGee’s bravery when he was asked whether he had targeted his “sideways” nose during his post-fight press duties.

“This dude fixed it himself,” he pointed out, sounding somewhat in awe of his beaten foe.

“He’s a f*cking savage. Maybe I forgot about it because it wasn’t f*cking crooked anymore. What a gangster.”

Commentators on the fight observed that McGee, who was declared clinically dead after a heroin overdose in 2005 and is now in long-term recovery from drug addiction, had “been through worse”.

Court McGee was out-pointing Carlos Condit but right at the buzzer, Condit knocked him down with a big uppercut, breaking his nose.

10-9 Condit. This could be critical if the fight goes the distance. #UFCFightIsland4

What a show from Court McGee. Broken nose be damned…he fought til the end! Utah should be proud. #UFCFightIsland4

Haha that nose was really bad. No idea how these guys keep fighting with a broken nose. The pain must be worse than bad.

“Court has to be up against it,” they said as he heroically approached the end of the fifth round.

“I wonder whether he really comprehends what happened at the end of the first round. He knows his nose is busted, though.”

Sharing a post-fight photo wth Condit in which the extent of the damage to his nose was not visible, McGee called the experience “an honor”.

Despite falling to his third straight defeat, the slugger demonstrated his durability once again in his tenth year with the UFC, having gone the distance in his last seven fights, winning twice.

MMA and vibe. #UFC253 Man Court McGee got his whole nose broken and hung in there. If I got jacked up like that I’d just quit and go home.

Court McGee should get a gangster of the day bonus for setting his own broken nose straight during that fight.

“Court McGee got his whole nose broken and hung in there,” applauded one fan.

“If I got jacked up like that, I’d just quit and go home.”

Another applauded: “What a show from Court McGee.

“Broken nose be damned – he fought until the end.” 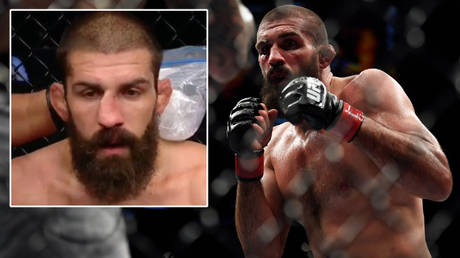