‘Here’s your chance to jump on the island!’: Islam Makhachev CALLS OUT UFC newcomer Michael Chandler as Dos Anjos bows out

‘Here’s your chance to jump on the island!’: Islam Makhachev CALLS OUT UFC newcomer Michael Chandler as Dos Anjos bows out

Russian UFC star Islam Makhachev has issued a challenge to UFC newcomer Michael Chandler for a bout on “Fight Island” after former champ Rafael Dos Anjos was forced to bow out of their fight following a positive COVID-19 test.

Makhachev and Dos Anjos were scheduled to face each other at UFC 254 on October 24 but the UFC are scrambling to find a replacement after the Brazilian was ruled out due to the ongoing coronavirus pandemic, and Makhachev has one or two ideas about who he would like to face.

Former Bellator champion Chandler, who inked a deal with the UFC last month, has been placed on standby for the UFC 254 headliner between Khabib Nurmagomedov and Justin Gaethje and will step in should either man be forced to withdraw, but 18-1 contender Makhachev says that Chandler, who is in training and will attempt to make weight for the event regardless of the status of the main event, should step up.

“RDA is out yo @MikeChandlerMMA here’s your chance to jump on the Island #UFC254,” Makhachev tweeted early Friday.

Makhachev’s recent run in the UFC, where he has won six straight fights including victories against well-regarded fighters Davi Ramos, Gleison Tibau and Nik Lentz, has long campaigned for a clash with one of the lightweight division’s standout fighters.

Chandler very much fits the bill. The 34-year-old American has long been considered one of the top 155-pound fighters in mixed martial arts and this was very much on display in his last fight in Bellator in August, where he earned a first-round KO victory against former UFC champion Benson Henderson.

However, it remains to be seen if Chandler would be tempted to take on what would be a risky fight with the 11th-ranked Makhachev when a host of other, better-ranked contenders like Dan Hooker and Paul Felder are potentially available.

On the flipside, ending Makhachev’s impressive winning streak could potentially serve as an ideal entry point for Chandler in the talent-rich lightweight fold.

What’s up Tony ?
The closest thing to @TeamKhabib is @MAKHACHEVMMA
Now RDA Is out
Would you like to take this fight?
Thank you sir @TonyFergusonXT

Bulshit guy @danthehangman can come see me too. We don’t need to sell tickets now 😀

Makhachev and his manager Ali Abdelaziz, however, are spreading a wide net and have also issued a blanket challenge to other fighters like Hooker, Tony Ferguson, and Charles Oliveira.

Whichever way this ends up panning out, it seems that there will be an upheaval in the UFC’s list of contenders at 155 pounds before long. UFC 254 will establish whether Khabib Nurmagomedov or Justin Gaethje will be sitting at the top of the division as 2020 rolls to a close, while the mooted fight between Conor McGregor and Dustin Poirier will also establish a brand new top contender.

And with the likes of Ferguson, Hooker and now Makhachev jockeying for position, plus the arrival of more world-class competition in the form of Chandler, the UFC’s lightweight division is about as competitive as it has ever been. 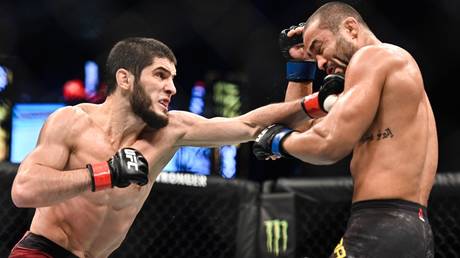