Russian ace Maria Sharapova may be officially retired but she’s showing no signs of slowing down with her fitness regime, taking to the beach to hit the pads as part of a grueling workout.

The five-time Grand Slam winner called time on her glittering career earlier this year, citing the increasing toll that injuries had taken on her body.

But far from putting her feet up, she’s continued to maintain the trim frame that made her a pin-up girl for tennis and a mainstay of glossy magazines.

Sharapova’s latest workout took her to the beaches of the US with trainer Tommy Cassano, where she first limbered up under clear blue skies by grooving to a rap track while Cassano applied hand wrap.

The 33-year-old stunner then pummeled away at the pads before taking up the battle ropes for a full-body workout.

The toned tennis ace continues the intense workout by doing lunges with weights and the sprints while her trainer provided resistance.

Sharapova’s workout clip closed with her doing a series of stretches with resistance bands.

“Wowzers I forgot how tough you are!! Hello outdoor workout, I’ve missed you! Thank you for making it so fun, @tommycassano!!” Sharapova captioned the clip.

After her exertions the Russian star has since taken a well-earned rest, treating British businessman boyfriend Alexander Gilkes to a birthday roadtrip, as the pair shared images of themselves ‘glamping’ in the Colorado wilderness. 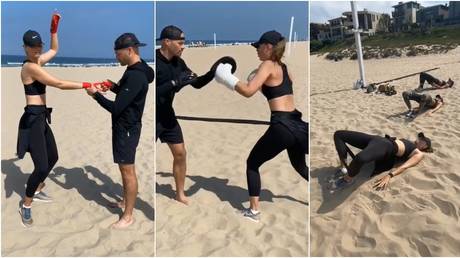