‘He’d already given up’: Fans SLATE Messi for lacking leadership of Ronaldo after footage caught star SULKING at half-time (VIDEO)

‘He’d already given up’: Fans SLATE Messi for lacking leadership of Ronaldo after footage caught star SULKING at half-time (VIDEO)

Lionel Messi’s meek influence on Barcelona’s Champions League disaster against Bayern Munich has come under fire from fans, fueled by footage of the Barcelona icon hunched disconsolately on a bench in the locker room at half-time.

A week after Ballon d’Or rival Cristiano Ronaldo was unable to save Juventus from tumbling out of the Champions League in the round of 16, Messi might have wished his side had never made it a stage further as Barcelona were battered by Bayern Munich in an 8-2 mauling that was made all the more painful by the involvement of arguably the world’s greatest forward.

While strike partner Luis Suarez gave Barca brief hope of an unlikely comeback with a goal shortly after the break to reduce the arrears to 4-2, Messi was almost anonymous as he ended his season on the European stage with a paltry total of three goals.

“Their big player didn’t step up,” said one fan, watching a clip that caught Messi slouched in the locker room at the interval, making no eye contact with shellshocked goalkeeper Marc ter Stegen, who was standing opposite him by the open door.

“At half-time, Messi had already given up. He couldn’t even motivate his teammates who look up to him.

“He is not a leader. Ronaldo doesn’t quit until it’s done.”

A week earlier, Juventus had been drawing 1-1 with visitors Lyon at the break in a match they needed to win by two goals, Ronaldo having scored a penalty two minutes before the break.

He then scored again with a sensational long-range strike 15 minutes after the interval, ultimately ensuring that he finished the season six goals ahead of Messi’s total in all competitions.

Messi was also filmed telling his teammates not to be “idiots” in the tunnel before they emerged for the second half against Napoli in the round of 16, when he scored his final goal of the season to help them to a 4-2 aggregate victory.

Messi is not a captain material. Imagine your team losing 4-1 at half time in a crucial Champions league game, you walk in to the dressing room at HT hoping for a little bit of inspiration and you find your captain looking like this. You know it’s over before it’s over. pic.twitter.com/7aIUlI7R9B

I am not saying he has to fix it just saying it is no captain way to sit like that at half time. However bad it may be. Nd no there messi isnt a great captain.

There are many reasons why Baryern won by that margin.
1. They are really good.
2. Their big player didn’t step up.
3. At half time, Messi had already given up. He couldn’t even motivate his teammates who look up to him.
HE IS NOT A LEADER. Ronaldo doesn’t quit till it’s done.

The Barcelona captain appeared to have nothing to say to the squad as they faced their imminent departure from the competition against Bayern, going in 4-1 down and repeating that scoreline in the second half for their heaviest ever Champions League defeat.

He kept silent after the debacle while the likes of doomed boss Quique Setien and long-serving defender Gerard Pique faced up to one of the most humiliating nights in the club’s history.

“I am not saying he has to fix it,” said one fan. “Just saying it is no captain way to sit like that at half time, however bad it may be. Messi isnt a great captain.”

“Imagine your team losing 4-1 at half-time in a crucial Champions League game,” said one viewer.

“You walk into the dressing room hoping for a little bit of inspiration and you find your captain looking like this. You know it’s over before it’s over.”

Messi at half-time against Napoli: “I think they’re gonna come out strong, let’s not be stupid. We have to be more composed than ever. We have a two goal lead, let’s not be idiots.”pic.twitter.com/TXuQSb2LGx

“Messi is no leader,” said another. “He looks defeated already at half time.

“The captain should have been the first player out of the changing room. Ronaldo would never do that.”

After Messi’s total, own goals account for the next-highest number of goals for Barcelona in the Champions League since the 2016/17 season, indicating how dependent the Spanish giants are on their all-time leading scorer.

He appeared to issue a rallying cry when he warned that his side’s tactical approach under Setien would need to change for the club to have any chance of winning this season’s tournament, but will now have to wait at least six years for his next Champions League trophy.

Strike partner Luis Suarez scored his first goal in the competition away from the club’s Camp Nou home for more than two years, only to face further mockery when statistics showed that eight of the 24 passes he had made in the match had been to restart play after goals.

Messi going to the Bayern Changing room to try and switch teams at half time: pic.twitter.com/MpBYOqs83r

Messi gave up before half time which is embarrassing🙄 Roma 3 LFC 4 Bayern 8 umtitilizo pic.twitter.com/Er6KLPHsMH

“It makes me both laugh and cry when I hear young people say that Luis Suarez is the best No.9 in history,” five-time Champions League winner Paolo Maldini had said earlier in the week, praising former Brazil striker Ronaldo as one of the superior players in Suarez’s position.

No sentiment was spared by Bayern midfielder Leon Goretzka and double goalscorer Thomas Muller when they were asked if they felt any pain for the crestfallen Messi and his teammates after the thrashing.

“No,” Goretzka bluntly replied. “It didn’t hurt – it was fun, actually.”

Muller said: “It was very special. We had so much fun today.”

❗️If Philippe Coutinho wins the Champions League with Bayern Munich, Barcelona will have to pay €5m to Liverpool. [@RafaelH117]

How in the world was that in the contract?

There was more mockery for Barcelona and derision towards their directors as it emerged that the club could end up owing around $5.8 million to last season’s champions, Liverpool, as a result of their own failures on the pitch and in the transfer market.

Phillippe Coutinho, the midfielder Barca signed for $182 million from the Premier League club, was sent to Bayern on loan after becoming one of the most expensive flops in footballing history.

He duly scored twice in five minutes against them after entering as a late substitute in Lisbon, and Barcelona will go on to pay Liverpool the sum as part of a deal they agreed should he lift this season’s trophy.

That is a distinct risk given that Bayern have a perfect record in their current Champions League campaign and are unbeaten in ten matches, winning nine of them.

“How in the world was that in the contract?” asked one reply.

The tragedy in this contract is what can drive a man mad. Its like paying child support for a baby your ex wife had in her new marriage. What??? 😭😭🙄😂😂

YES! That’s the ultimate knife twist lol. As much as I love Barcelona, that would be funny as hehl 🤣

“As much as I love Barcelona, that would be funny as hell.”

Even if Ronaldo could afford himself a laugh at Messi and Barcelona’s expensive, the Portugal captain and the only striker who has consistently rivalled his record over recent years have still set an unhappy record for themselves after Bayern dished out their drubbing.

Neither player will be in the semi-finals of the Champions League for the first time since 2005, when Ronaldo was a 20-year-old rising star at Manchester United and Messi was yet to turn 18 and was only beginning to fully establish himself in Barcelona’s first team. 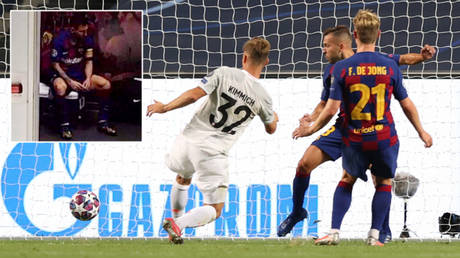