The two men who hold all the marbles in heavyweight boxing, Tyson Fury and Anthony Joshua, had a chance encounter in the southern Spanish city of Marbella ahead of next year’s rumored blockbuster showdown between the two Brits.

It is the first of what could be several meetings between the two champions in advance of what would be the biggest heavyweight unification fight in a generation tentatively scheduled for 2021 – so long as Fury gets past the trilogy bout in December with former foe Deontay Wilder which was guaranteed in his contract from February’s fight which was won by Fury.

Joshua, meanwhile, is scheduled to defend his world titles against mandatory challenger Kubrat Pulev – though the date and venue for the fight has yet to be confirmed.

Should both of those hurdles be cleared the prospect of a showdown between the two giant heavyweights is tantalizing one, and they whetted fans’ appetites of the potential matchup after Joshua posted a photograph of their impromptu meeting.

Tyson Fury after his face-to-face chat with Anthony Joshua in Marbella today: “2021, it’s going off.” pic.twitter.com/3K5oqEsM2y

Joshua – who was wearing a face covering – published the photo to his Twitter account while quoting the Neil Diamond song ‘Sweet Caroline’, which has become something of an unofficial theme song for British fighters.

Fury also posted the image to his personal Instagram account, hinting at next year’s super-fight: “2021, it’s going off.”

Both men are currently holidaying in the south of Spain, with Fury jetting out for the fourth birthday party of his son Prince Tyson Fury II.

Joshua has previously spoken of the bizarre nature of his relationship with rival fighter Fury, saying that the undefeated boxer occasionally calls him out of the blue to inform him that he will ‘knock him out’.

It’s beginning to look more and more likely that he will have that opportunity some time next year. 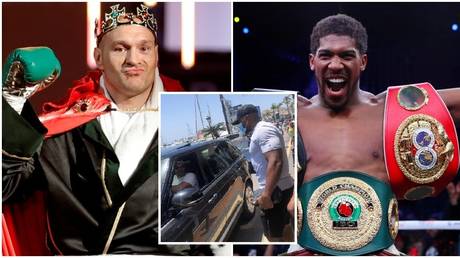