The post-game handshake is a tradition between rival coaches at the end of every NFL game, but Denver Broncos head coach Vic Fangio opted to abandon the gesture after a fractious end to his team’s 37-28 win at the New York Jets.

After a back-and-forth encounter in New York, Denver eventually pulled clear with a late Melvin Gordon touchdown after the Broncos’ dominant defense had forced Jets quarterback Sam Darnold out of the game with a shoulder sprain.

With time running down and the game seemingly out of reach, the Jets’ defense decided to exact physical revenge for their quarterback’s injury by targeting Denver’s debuting quarterback Brett Rypien in return.

The Jets defense racked up six personal foul penalties as they lost to the Broncos, including a huge late hit on Rypien with just seven seconds of the game remaining.

A seething Fangio charged onto the field after the game but, instead of heading to opposite number Adam Gase for the customary handshake, he yelled at his players to get off the field and into the locker room.

Live TV cameras picked up an irate Fangio telling his players to, “Head to the f*cking locker room!” as the Denver coach looked to get his players off the field and away from potential post-match skirmishes with a heated, defeated Jets team.

Speaking after the game, Fangio explained his move, saying, “There were a couple of personal fouls there at the end. Our sideline was getting p*ssed off about it and I wanted to avoid any confrontation at the end of the game.”

Rival coach Gase said he understood Fangio’s reasoning, saying, “I think he was just trying to make sure we didn’t have any kind of melee. It was getting heated.”

Adam Gase on not shaking hands with Vic Fangio at the end of the game:

“I think he was just trying to make sure we didn’t have any kind of melee. It was getting heated” pic.twitter.com/3IdtIlLKVK 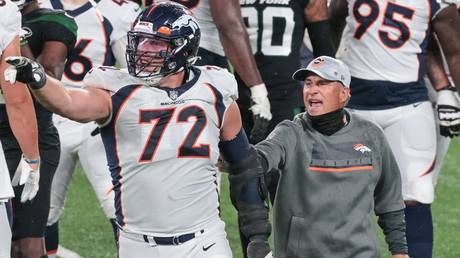