‘He would OBLITERATE him’: Pacquiao coach says bout with ‘bum’ Conor McGregor would end far more swiftly than Mayweather fight

‘He would OBLITERATE him’: Pacquiao coach says bout with ‘bum’ Conor McGregor would end far more swiftly than Mayweather fight

Manny Pacquiao would “obliterate” Conor McGregor and the boxing icon should not waste his time pursuing a contest with the Irishman, according to the Filipino star’s coach.

Retired former two-weight UFC title holder McGregor has in recent months teased the prospect of another foray into boxing, this time against eight-division world champ Pacquiao.

A showdown between the pair would be McGregor’s second boxing contest after he famously swapped the octagon for the ring to face Floyd Mayweather Jr in Las Vegas in August of 2017 – a bout in which the Dubliner surprised many with his aptitude before losing by TKO in the 10th round.

But McGregor, 32, would not be afforded any leniency should he take on the ruthless Pacquiao, according to the Filipino icon’s long-time strength and conditioning coach, Justin Fortune.

“Manny will destroy Conor McGregor inside three rounds. He will obliterate him too fast and too strong as an amazing fighter. McGregor is nothing,” Fortune told The Manila Times.

“I mean, my God, this is boxing, we are boxers. McGregor is an MMA guy and we can’t do MMA, and he can’t box, that’s very simple.”

Pacquiao, 41, is currently serving as a senator in his homeland and is a veteran of 71 professional fights, having his hand raised in 62 of them.

He was last in action in July of 2019 when he defeated Keith Thurman via split decision to win the WBA (Super) welterweight title and become the oldest champion in the history of the division.

The biggest bout of Pacquiao’s long and storied career was when he met Mayweather back in 2015 in a much-hyped showdown between two fighters widely considered among the greatest of their generation.

However, the contest – which Mayweather won via unanimous decision – was also criticized by some fans for being long overdue and coming when neither fighter was at the peak of his powers.

Unlike Mayweather and his team, Fortune suggested that McGregor was not worthy of earning yet another bumper payday at the hands of one of boxing’s greatest names.

“Why even make that guy rich? And it won’t do absolutely nothing for Pacquiao as far as his legacy,” Fortune said.

“Remember, this is just my opinion. Manny goes down as the greatest fighter in history when he finishes, because no one has done what he accomplished in boxing.

“Why destroy your legacy for a bum like McGregor?”

McGregor announced in June that he was retiring from MMA, his third such claim in the past four years.

The Notorious Dubliner later signaled his interest in a bout with Pacquiao, tweeting “I accept” in the boxer’s native language.

According to The Manila Times, Pacquiao’s family and friends would be keen for him to secure what would undoubtedly be a bumper payday by taking on McGregor. 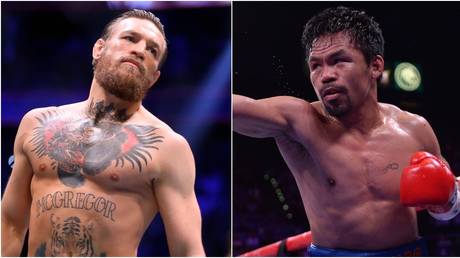