Close
Trending News
HomeSport‘He will want to stay’: Luis Suarez says ex-teammate Lionel Messi would likely STAY at Barcelona under a new board

‘He will want to stay’: Luis Suarez says ex-teammate Lionel Messi would likely STAY at Barcelona under a new board

‘He will want to stay’: Luis Suarez says ex-teammate Lionel Messi would likely STAY at Barcelona under a new board

Wantaway Barcelona ace Lionel Messi could still be persuaded to stay at the Camp Nou, according to a man who was recently dumped from the Catalan club, Luis Suarez.

Uruguayan striker Luis Suarez has swapped Barcelona for Atletico Madrid, but said that his friend and teammate will likely prefer to remain at his boyhood club, if things behind the scenes can settle down and create an atmosphere the Argentine ace can enjoy again.

Messi attempted to engineer a move away from Barca in the summer, but after a very public back-and-forth with the club, agreed to stay until his current contract ends in June 2021.

He’ll be free to negotiate with teams from January, with cash-rich Premier League giants Manchester City, managed by Messi’s former boss Pep Guardiola, thought to be the early favorites to secure his signature.

But Suarez said that the option of Messi staying at Barca remains a possibility.

“Maybe there’s the possibility of him playing for another club, but if he feels comfortable and happy, and a new board come in, he will want to stay at the club,” Suarez told ESPN show 90 Minutes.

“As a friend, I will be happy if things go well for him (at Barca), but also if he goes to another club.”

Meanwhile, matters at the top of the club remain in flux, with Barcelona president Josep Maria Bartomeu a deeply unpopular figure among the club’s fanbase. He has called for club elections in March 2021, but a vote of no confidence is set to be made against him and the club’s board in the coming months.

A change at board level could potentially open the door for Messi to remain at the Camp Nou, but any change would have to happen soon, with the player likely to agree a deal with a new club early in 2021, if he remains determined to leave Catalunya.

Manchester City will certainly be keen to chat to him once the negotiating window opens, with the Premier League club’s CEO Omar Berrada refusing to rule out a bid from the club in early 2021.

“It’s almost impossible to guess what will happen next summer,” he told the Manchester Evening News.

“Messi is a generational talent, he’s the best player in the world and probably an exception to potential investments that we’d do out of the ordinary.

“For every single position we have to be prepared because there are so many things that can happen, but at the same time I think we have the financial strength and ability to make that investment, when required.” 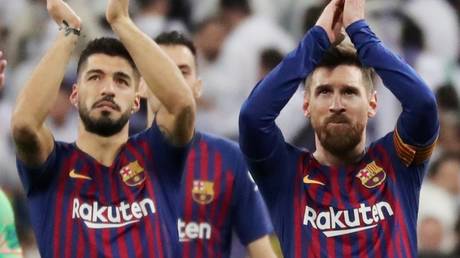 Church of England dumps all ExxonM...