‘He will play again’: Teenage Russian goalkeeper struck by LIGHTNING during training ‘getting better’

‘He will play again’: Teenage Russian goalkeeper struck by LIGHTNING during training ‘getting better’

Ivan Zaborovsky, the 16-year-old FC Znamya Truda goalkeeper who was put into a coma after being struck by lightning during training, is “getting better” and will play football again according to the team’s general director.

The youngster was training with the third tier side in the Moscow region of Orekhovo-Zuevo at the weekend when footage captured a bolt of lightning poleaxing him to the floor in a heap and a cloud of black smoke as shocked teammates look on in horror.

Paramedics arrived shortly after and performed emergency first aid before transporting Zaborovsky to hospital, where he was placed in the intensive care unit.

Igor Mayorov, the club’s general director, said on Monday he had been in touch with the boy’s father, who relayed the situation in the hospital and also that his son would play football again.

“I have been in contact with his father, [Ivan]’s eyes react, he responds to commands, the dynamics of recovery are positive, he will play again,” Mayorov said.

“We will see how MRI, ECG go. His situation is under the control of the region’s Minister of Health.”

“Hey Ivan. I heard your story. I’m glad that you’re getting better. I wish you a speedy recovery. Be healthy and make your loved ones proud. We’re with you,” Ukrainian Hodzyur said. 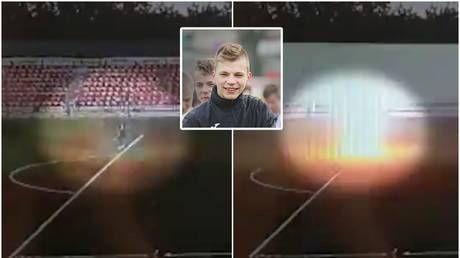