Alphonso Davies failed to get his hands on Lionel Messi’s shirt after Bayern Munich’s Champions League drubbing of Barcelona last week because the Argentine star “was upset,” the Canadian youngster has revealed.

Full-back Davies, 19, has been a revelation with his performances this season and played the full 90 minutes on Wednesday night in Lisbon as Bayern Munich swept past Lyon 3-0 to book a Champions League final spot against PSG on Sunday.

Davies also starred in Bayern’s 8-2 quarterfinal humbling of Barcelona, where he came up against Messi, admitting before that clash that he had grown up idolizing the six-time Ballon d’Or winner.

But such was the crushing nature of the defeat that the Germans inflicted on Messi and Barcelona, Davies has now revealed the star was seemingly too shell-shocked to swap shirts afterwards.

“I asked for [his shirt] but I think he was a little bit upset,” Davies told the media after Bayern’s win on Wednesday night.

However, an alternative explanation could be that Messi was simply following new UEFA coronavirus guidelines which advise players against swapping shirts after matches.

Barcelona’s devastating defeat has sent the club tumbling further into crisis and has already cost manager Quique Setien his job – being replaced by Dutch former player Ronald Koeman – as well as precipitating the departure of sporting director Eric Abidal.

Messi is also rumored to be as close as he has ever come to quitting the club he has been at since the age of 13.

In contrast, the Bayern Munich juggernaut rolled on against Lyon on Wednesday, overcoming some early scares to run out comfortable winners thanks to a double from winger Serge Gnabry and a late strike from prolific Polish forward Robert Lewandowski.

It was a record 10 wins from 10 in this season’s Champions League for Bayern, and was an incredible 20th straight victory in all competitions for Hansi Flick’s relentless team.

They will face PSG in Sunday’s final in Lisbon after the French champions overcome RB Leipzig 3-0 in their semifinal earlier this week.

PSG will be making a first appearance in a Champions League final, while Bayern will be going for a sixth title overall but first since 2013.

Davies, who has won plaudits for his turbo-heeled performances from left-back this season, is set to become the first Canadian ever to play in the European club football showpiece. 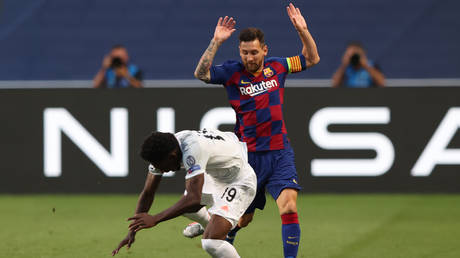