Close
Trending News
HomeSport‘He was sent by god’: Novak Djokovic’s dad accuses media of ignoring Serbian superstar and says he is ‘loved by all normal people’

‘He was sent by god’: Novak Djokovic’s dad accuses media of ignoring Serbian superstar and says he is ‘loved by all normal people’

‘He was sent by god’: Novak Djokovic’s dad accuses media of ignoring Serbian superstar and says he is ‘loved by all normal people’

Australian Open champ Novak Djokovic’s father says “97 percent” of Serbian people support the tennis world number one, adding that he deserves more praise and was “sent by god” at “the worst time” for the people of his homeland.

Srdjan Djokovic, 60, has predicted that dominant Djokovic will collect the three major titles required to beat arch-rivals Rafael Nadal and Roger Federer’s total of 20 “in the next year and a half”, adding that he would then be the best male player of all time.

He said that the 33-year-old was a “deity” in China, India, Russia, Brazil and Africa and claimed that Djokovic had been destined to become a symbol of joy for his nation after his tough upbringing amid a civil war.

“For 97 percent, he is a member of the Serbia family,” Srdjan told Kurir, suggesting that a “frustrated” minority felt Djokovic was too “cosmopolitan”.

“We had to raise Novak during the most difficult times in Serbia, tormented by bombing raids. It paid off in the end because he is a hard worker, because the representative of Serbia is… a patriot, because he is the best athlete in the world. Not just in tennis.

“At the worst time for the Serbian people, he was sent by God… for me personally, he even extended his grandfather’s life.

“In Banja Luka, where ‘Grandpa Nola’ lived, he watched every game even though he was seriously ill.

“He was always impatient when Novak played, so he extended his life by several years. And so did many of my friends.

“They told me it was the same with them. He makes a fairytale out of the life of old people.”

British tennis chiefs were said to have offered Djokovic citizenship more than a decade ago in an extraordinary attempt to unite the young sensation with fellow future Grand Slam winner Andy Murray.

“We talked to our children,” said his father. “Nobody was in favor of leaving Serbia and changing citizenship. We are Serbs.

“All normal people in the world love him. Have you ever wondered why he plays best in China?

“He feels love there, real love – something he is not allowed to experience in the west. In the west they think that only they exist, but they are only one fifth of the world.

“The western media have only focused on Federer and Nadal and didn’t pay any attention to Novak. That was the only way to stop him.

“But you have to understand that there is no way you can stop him. You have been torturing yourselves for 10 years.

“And they add another year to their agony instead of surrendering and recognizing that Novak is the best in the world. He is incomparable.”

Despite retaining his crown in Melbourne, Djokovic has endured one of his most testing and unusual years on and off the court.

From his Adria Tour event that caused controversy and Covid-19 diagnoses to being disqualified from the US Open and criticized over his attempts to improve player welfare in Australia, Djokovic’s image has taken the kind of battering that any parent would worry about seeing.

“He not only fights for himself, he also fights for other players who can barely make ends meet,” insisted Djokovic senior.

The president of the Sofia tournament, member of the ITF board, responds firmly to Srdjan Djokovic, the father of the world number 1, after the accusations made by him to Grigor Dimitrov after the fiasco of the Adria Tour. https://t.co/OMihLmgrul pic.twitter.com/WqGDseUpWA

“He has such nice manners: how he greets his opponents, how he behaves towards the hosts, how he holds out his hand and kisses the opponent when he loses.

“Which other athlete does this? He has seldom received a fair play award. And do you know how many Federer has? 15.

“Of course [criticism is] hard to bear. He does the opposite of what [attacks on him] say.

“He doesn’t give anyone a reason to treat him like that, but it’s just like that now. So they treat us as a country and him as people.”

Djokovic’s greatest fan reserved plenty of praise for his Russian opponent in the final, Daniil Medvedev, and the compatriot Medvedev beat in the final eight, Andrey Rublev.

Djokovic’s father 👉”I don’t understand why Federer keeps playing at 34yo”..
This man should #Never open his mouth😲!🙊 pic.twitter.com/0AZ5fHYyJL

“He is a fantastic tennis player,” Djokovic said of world number three Medvedev. “He’s great. He’s going to be a champion.

“Now he has to wait until Novak, Nadal and Federer hang up their rackets. These three rocked up and made each other better.

“The young players who are coming are fantastic. Most of them are from Russia. It’s no longer just this western world.

“The Chinese have also started playing tennis. Westerners have to understand that we also know something about life. And most importantly, we know how to hit that ball.

“They thought that would never change but, to their regret, Novak has changed. Now there is a great invasion of great young Russian tennis players.” 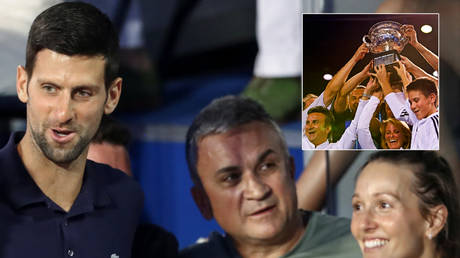 Pfizer insists there ARE enough va...