Mike Tyson’s ambitions of competing in the current heavyweight division have been slammed by Tyson Fury’s promoter Frank Warren, who says the “baddest man on the planet” reached his peak 30 years ago and “didn’t last the course”.

Veteran advisor Frank Warren, who once said he was “disgusted” by Tyson’s claims that he used a fake penis to fake a drugs test, organized several of the returning icon’s scraps in Britain and said he had helped to mastermind his downfall in the penultimate professional fight of his career to date.

Warren argued that one of Tyson’s rivals, former champion Evander Holyfield, did not fear “Iron Mike” in the way that saw many of his opponents beaten before they had even stepped in the ring, adding that Tyson “just didn’t do it for me.”

“He won a world title and everybody was talking about him,” Warren told TalkSPORT, recalling Tyson’s rise to become the youngest heavyweight ever at the age of 20. “For me, he was one of the most exciting young heavyweights.

“However, he doesn’t get in my top ten because he just did not last the course. He was s*dding around, drugging it and boozing, went to prison.

“A lot of the fights that he had, he beat the guys before they got in the ring. He intimidated them.

“He was a street guy. Most guys in boxing come from the streets, and he had the beating of them.

“But he could never intimidate Evander Holyfield and he didn’t intimidate Buster Douglas.”

Tyson suffered a shock first defeat of his career to huge underdog Douglas in 1990, having divorced his first wife, actress Robin Givens, a year earlier following a joint TV interview in which she claimed he had a wide variety of personal problems.

He was convicted of rape two years later and served three years of a six-year sentence before being released on parole, winning two heavyweight titles ahead of two straight defeats against Holyfield as part of a run of only five wins in his final 12 fights.

“As a young man he was very, very exciting and you’ve always got those fights that you think about,” said Warren, when asked how Tyson would have fared against legendary fighters from history.

“At his best, would he have beaten Muhammad Ali at Ali’s best? They would always have been great fights.

Tyson has looked ripped and quick on the pads in training ahead of his fight against another multiple title-winner, Roy Jones Jr, in the US on November 28.

That has led the 54-year-old to reveal serious-sounding plans to challenge the likes of Fury, although Warren said that Tyson’s abilities were already waning badly when he put on his fight with British journeyman Danny Williams in Kentucky in 2004.

Williams secured a fourth-round knockout against Tyson, who was also well beaten by Kevin McBride in his most recent fight a year later.

“When I put him in with Danny Williams in the latter stages of his career, I said to Danny, ‘just tuck up for a couple of rounds,'” explained Warren.

“‘He’ll be like vintage Mike Tyson for a round or two rounds, then you’ll do a job on him.’ That is what he did.” 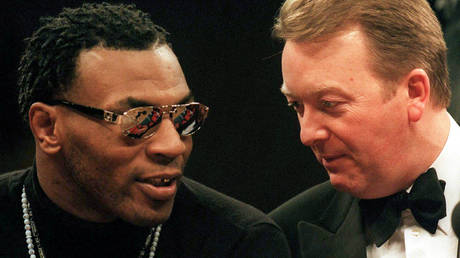