Close
Trending News
HomeSport‘He was provoking me the whole match’: Football referee speaks out after FIST FIGHT with player (VIDEO)

‘He was provoking me the whole match’: Football referee speaks out after FIST FIGHT with player (VIDEO)

‘He was provoking me the whole match’: Football referee speaks out after FIST FIGHT with player (VIDEO)

A friendly match between two Russian football clubs ended in scandal after an assistant referee who officiated at the game brutally kicked one of the players on the field.

The incident, which was caught on camera, took place after the final whistle of the friendly encounter between Makhachkala’s Legion and Sakhalinets from Moscow.

The referee – later identified as Sergey Tumasov – explained that he punched the Sakhalinets player in the face due to his provocative and disrespectful behavior.

“They have a team comprised of popular bloggers; all they need is to show off and hype. Shonia was provoking and confronting me during the entire match. The fight took place when the match was already over,” the official said.

Video of the incident has been widely shared on social media, triggering uproar among users, who accused Tumasov of brutality and inappropriate behavior.

The referee was also seen using a mobile phone during the game, triggering speculation that he might have been involved in gambling.

The match, which took place in Kislovodsk on Monday, ended in a 1-1 draw, with the post-game violence being discussed more than the final score. 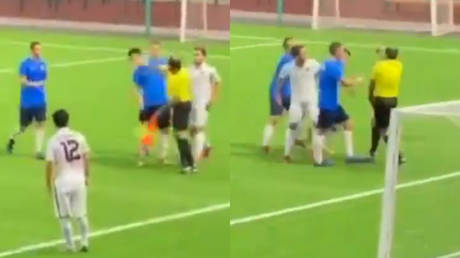