At the height of his days as a lightning quick winger in the Russian and English Premier Leagues and on the international stage, Andrey Arshavin was noted for his prolific scoring ability for Zenit St Petersburg, Arsenal and the Russian national team, including once netting four goals in a single game for The Gunners in a 4-4 draw with Liverpool at Anfield.

Taylor, real name Lyubov Bushuyeva, told local Russian channel ‘KP’ that she and a friend met Arshavin and former Russian international Vladimir Bystrov, when the former called her over to his table in the swanky, waterside eatery for a night of fine dining.

“I couldn’t believe that the former captain of the Russian national team was inviting me to his table,” she said of the encounter with Arshavin, who spent four seasons in the Premier League with Arsenal as well as acquiring 75 caps for Russia.

“It goes without saying that they were treating us. Two bottles of quality 12-year-old wine, shisha and the like. Arshavin was very quiet and standoffish, but often flashed a wad of cash. And Bystrov talked without pausing for breath, he’s a fun guy.”

The 27-year-old blonde told of a night of charm that led to the hotel room of twice-divorced Arshavin and fellow former Zenit player Bystrov, when her plans for debauchery hit a snag after she asked for a selfie and unintentionally enraged the players.

“It was stupid to turn down sex! I followed them there, especially as these two football stars were trying to charm us,” Taylor explained. “I came to the room, Arshavin and Bystrov lay down on their respective beds, and before beginning I asked to take a selfie as a memory.

The next day Taylor told how she tried to get revenge on the pair by asking them tongue-in-cheek for a selfie again by approaching them at the riverside restaurant where they had become acquainted, only to be swiftly rebuffed by the shisha-smoking players.

“No, we’re not taking photos… that’s how it all started yesterday,” a figure can be heard saying in a video of the confrontation.

Arshavin made his name as a playmaker and winger, winning an array of trophies domestically and in Europe for hometown team Zenit before becoming the most expensive player in Arsenal’s history upon completion of a £15 million move to North London.

He played in the Russian team that reached the Euro 2008 semi-finals as well as at the Euro 2012 campaign, and was named captain of the national side for the failed 2010 World Cup qualifying campaign.

Omg its so amazing in gelendzik)) I am rest right now)) and I change my look pic.twitter.com/aV783Ud2dX 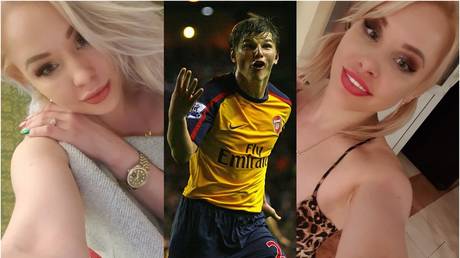 How to delete and unsend WhatsApp...