Bubba Wallace has been embroiled in more controversy after slamming rival Michael McDowell for a crash at the NASCAR All-Star Open before dropping the wrecked bumper of his car at his door – leaving fans accusing him of egotism.

Wallace was furious after being eliminated from the All-Star Open when he was hooked into a wall by McDowell, depriving him of the chance to advance to the All-Star Race by winning a stage in the Open or a fan vote.

The 26-year-old, who drives a Chevrolet Camaro for Richard Petty Motorsports, accused McDowell of “disrespect” and called the Front Row driver “a joke” after dropping the bumper from his wreckage at McDowell’s hauler door.

“What the hell is that all about?” Wallace asked on his radio, who was incensed at what he perceived as an intentional “hook” into the left barrier by McDowell. “Complete hook job.”

.@BubbaWallace took the bumper of his wrecked #43 car and dropped it a the hauler door of @Mc_Driver.

Not a happy driver.

Fans were split over Wallace’s behavior, with some accusing the American of suffering from poor judgement as a result of his enhanced profile in the aftermath of the recent scandal when he revealed that a noose had been found in his garage.

The only African-American driver in NASCAR’s top-flight racing series was horrified at the racist symbolism, but US President Donald Trump subsequently claimed that the discovery had been a hoax and told Wallace to apologize.

“He truly thinks he is bigger than the sport now with that ego,” said one fan. “It’s short track racing. He is milking this newfound spotlight for all it is worth.”

Others argued that confrontations of the kind that Wallace and McDowell engaged in were common in the sport, pointing to a scrap between drivers Noah Gragson and Harrison Burton in which punches were thrown in the same race.

“He got hooked into the wall,” said an apologist for Wallace. “Racers have reacted in this manner after being wrecked since racing started. Get over yourself.”

He truly thinks he is bigger than the sport now with that ego. It’s short track racing. He is milking this newfound spotlight for all it is worth.

He got hooked into the wall… Racers have reacted in this manner, after being wrecked, since racing started. Get over yourself…

And that’s why he did ALL this mess. ATTENTION!!!😡😡

A racing obsessive fired back: “That’s why he did all this mess – attention.”

Wallace has been embraced by some of the most high-profile names in sport and has become a hero of the Black Lives Matter movement since speaking out about the noose.

Insisting that an FBI announcement that the noose had been hung in 2019 did not reduce the validity of his outrage, Wallace has seen his social media following leap to almost 500,000 and agreed a deal with rapper Dr Dre’s Beats company that was supported by NBA star LeBron James.

Wallace was also involved in an altercation with Alex Bowman last year, throwing water in the Hendrick driver’s face after an all-day feud between the pair. 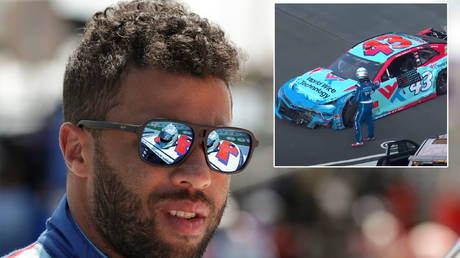