Sixteen-year-old Russian goalkeeper Ivan Zaborovsky, who was left in a coma after being struck by lightning in training, has been speaking to the club captain and is “optimistic” of making a return to training in two weeks.

Zaborovsky was removed from lung ventilation apparatus in hospital as doctors began to gradually ease the teenager out of a medically-induced coma earlier this week.

He was taken to a Moscow hospital after he lost consciousness and stopped breathing when he was struck by a lightning bolt in a harrowing accident that was caught on film during a training session.

Znamya Truda captain and fellow goalkeeper Vitaliy Chilyushkin said that Zaborovsky’s condition had improved sufficiently for him to be able to communicate with him on Wednesday. “He said that everything was fine, he’s recovering,” he told RIA Novosti.

“Vanya is optimistic. He even said that in two weeks he’s ready to go out on the field and train. Clearly, there’s no need to rush anything – the main thing is health.”

Chilyushkin revealed that the senior squad at the club and goalkeepers from the Russian Premier League had responded to requests for messages of support for Zaborovsky, who had been promoted for a training session with the first team the day before his ordeal.

“Vanya was recently pulled into our team,” he said, adding that the incident happened while he was training with the youth team.

“Personally, I didn’t see it. It’s a very terrible thing, of course. Thank god he has survived.

“I’m sure that he will only become stronger and I hope he will return soon. All of the team are waiting for him.”

In a further sign of Zaborovsky’s improving condition, his club tweeted on Tuesday that the youngster was even feeling well enough to call coach Anton Basov on his birthday and send him his best regards. 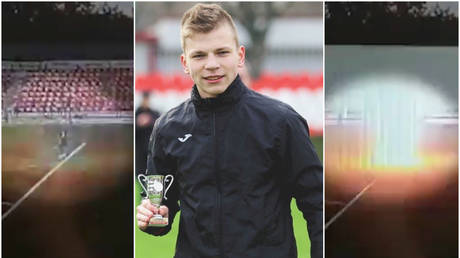 ‘Nailed it’: Rugby star laughs off...