Chechen leader Ramzan Kadyrov broke the news of the passing of UFC lightweight champion Khabib Nurmagomedov’s father and trainer Abdulmanap on Friday from Covid-19 by honoring his “raising a worthy generation”.

Kadyrov, a friend of the Nurmagomedov family and who was seen cageside in Abu Dhabi after the 155 lbs UFC titleholder’s win over Dustin Poirier in September, took to Telegram messenger to inform the world of the death of renowned MMA trainer Abdulmanap, who was aged just 57.

“Sad news has reached me, my friends, that Abdulmanap Nurmagomedov has passed away,” Kadyrov wrote. “From the whole of Chechnya, I wish sincerest condolences to the family of Abdulmanap Magomedovich!

“He has departed us, having left behind a fine name and having raised a worthy generation! Such a destiny is the will of the Almighty!

“We pray to the Almighty, to forgive his servant and deliver him to the gardens of eternal paradise. Allah, give his family and loved ones the patience to withstand the pain of loss. We all belong to Allah and will return to him sooner or later.”

Aside from his son Khabib, who became the first ever UFC champion from Russia, army veteran Abdulmanap was well known for producing a string of wrestling, samba and martial arts champions from Russia’s Southern Republic of Dagestan with pioneering training methods and a wealth of experience in hand-to-hand combat competition.

It was in the converted gym in the family’s basement created by Abdulmanap where Khabib first learned to wrestle by watching his father’s students train under his tutelage.

The elder Nurmagomedov died of complications due to Covid-19 infection, never recovering from the brain damage brought on by a stroke and heart attack that left him comatose.

He had earlier undergone emergency heart bypass surgery and was twice entered into a medically-induced coma. Despite waking second time round and his condition being described as ‘serious but stable’, he eventually lost his battle to regain full health. 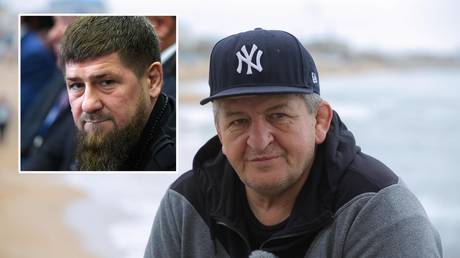 'I ask God that the deceased...