Goalscoring legend Pele has said that he has never changed his claim to have scored an unbeatable 1,283 goals during his celebrated career – but his personal response to the ongoing row has failed to convince many football fans.

The Brazil icon was rumored to have changed his online biography to the mammoth figure this week, with cynics questoning whether the debatable total had been produced in response to Cristiano Ronaldo overtaking his career haul last weekend and Lionel Messi breaking his record for a single club last month.

The club where Pele spent the majority of his playing days, Santos, earned derision from history hawks when they also claimed that Messi was nowhere near their most famous ex-player’s tally, which they reported as a whopping 1,091 goals.

Now the superstar striker has had his say. “I was accused by the press of having changed my Instagram bio to overshadow these big stars who are breaking my records,” he told his following of more than 2.7 million on Twitter.

Pele remembering to include the goals he scored in the movie ‘Escape to Victory’ pic.twitter.com/Mzil8l2EgA

1283 goals only if you include those scored in your backyard when you were a kid.

Pele mate ive just scored 20 goals with you on fifa if u want to add them to your goal tally?

“The bio text has always been the same since I joined the platform. None of this should distract us from their incredible achievements.”

If Pele had hoped to quieten the barrage of jokes around his astounding claim, his announcement failed to achieve its goal.

“As you typed this, you scored 30 goals,” quipped one respondent, nodding to Pele’s apparent belief that he has scored 526 goals more than the official record books show.

Hello pele, can you give us some updates on how many goals you scored on fifa last night. ❤

What ever you say pic.twitter.com/6J54OVX4TQ

Another offered: “Pele, mate – I’ve just scored 20 goals with you on [computer game] FIFA, if you want to add them to your goals tally.”

Pele would have had to have scored roughly 61 goals a season during his 21-year senior career to have reached 1,283 goals, with FIFA crediting him with the remarkable but slightly more modest finishing figure of 757 goals.

That made Ronaldo the second-highest scorer of all time when he went one beyond that total by scoring twice for Italian giants Juventus in Serie A last weekend.

As you typed this, you scored 30 goals

Against the grandkids in the back garden doesn’t count

The 80-year-old stuck to safer ground on Instagram, where he issued a motivational message to Santos ahead of their 0-0 draw at Boca Juniors in the first leg of their semi-final of prestigious South American cup competition the Copa Libertadores.

“It doesn’t matter how big the challenge may be – we always have to keep fighting, dribbling and, above all, believing,” he told the Brazilian Serie A side, accompanying his rousing post with a photo of himself in his pomp.

“This is a lesson in football and also in life. Today is another battle day. It is a day to write another chapter in the history of the Libertadores. I’ll be cheering for you.” 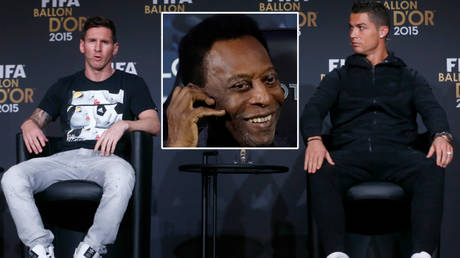