‘He incites violence, and this is scary’: Olympic champion Karolina Sevastyanova HITS OUT at Khabib Nurmagomedov

‘He incites violence, and this is scary’: Olympic champion Karolina Sevastyanova HITS OUT at Khabib Nurmagomedov

“The thing that he incites violence is really scary,” Sevastyanova told R-Sport.

“I’m totally against it. This is not right to put it mildly. We live in a very unstable world, we have an unstable situation right now with people going through hard times. Why does he incite violence? Especially now when on the contrary we should stay together helping each other, but not killing each other. I think his actions were dictated by his temperament. They live in accordance with rules inherent to their culture,” she added.

The undefeated UFC champion had savaged Macron amid mounting tensions in France over religion and freedom of speech, after satirical magazine Charlie Hebdo posted cartoons of Prophet Muhammed.

Khabib – a devout Muslim from the Republic of Dagestan – shared his disgust at the French president on social media, accusing him of insulting Muslims by defending Charlie Hebdo’s right to publish the cartoons.

“May the Almighty disfigure the face of this scum and all his followers, who, under the slogan of freedom of speech, offend the feelings of more than one-and-a-half billion Muslim believers. May the Almighty humiliate them in this life, and in the next. Allah is quick in calculation and you will see it,” Khabib wrote in Russian, accompanying the text with a mock-up image of an imprint of a boot on Macron’s face.

His comments sparked mixed reactions with many Russian public figures condemning Khabib for his post claiming it “instigates aggression and hate.” 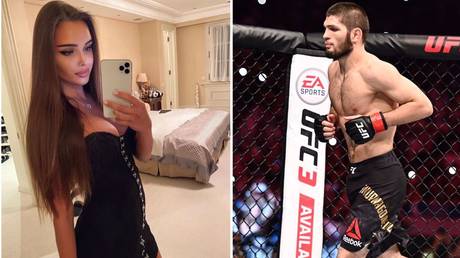