Close
Trending News
HomeSport‘He has never been more determined’: Lionel Messi’s step beyond Barca power play is moving the unthinkable towards the unstoppable

‘He has never been more determined’: Lionel Messi’s step beyond Barca power play is moving the unthinkable towards the unstoppable

‘He has never been more determined’: Lionel Messi’s step beyond Barca power play is moving the unthinkable towards the unstoppable

An extraordinary 24 hours in the brinkmanship between Lionel Messi and Barca has truly set the star on course to leave the club. For all his magic on the pitch, the striker’s defining moment of his career might have just happened.

Tittle-tattle has turned from hot air to hottest topic within less than 24 hours. Unless Lionel Messi is spectacularly calling Barcelona’s bluff, the most monumental transfer possible has almost instantly shifted from ridicule to reality.

Even after the accusations of deliberate image-tarnishing, traumatic end to the season and repeated rumors of real unrest, no one seriously suspected that Messi’s shadowboxing with the club where he has spent his entire career were anything more than posturing.

The built-in clause that allows the striker to signal his departure by June 10 each year was considered the equivalent of a nuclear button under the table for the talisman beloved of one of the greatest clubs in the world, only to be used as an emergency reaction to the kind of unthinkable catalogue of catastrophes that have been allowed to unfold at the Camp Nou.

That last resort looks increasingly like the last line of his 634-goal Barca career, and the wholly unexpected end of what was thought to be an essentially unconditional alliance could be hastened by that condition of finality in his contract.

Blather about Messi has always been a staple of gossip column fodder. Now Barcelona have switched the story from frivolous rumors to in-depth analyses of where it all went wrong, with the likes of Guillem Balague, the author of one of the definitive accounts of Messi’s career, telling millions of people that the 33-year-old is focused more on his next club than salvaging the saga he is embroiled in.

That lays waste to the verdict by Victor Font, the man who could succeed blundering club chief Josep Bartomeu, that Messi will stay as long as the presidential election scheduled for next summer is held immediately.

Joan Laporta, the president between 2003 and 2010, was one of many suggesting that the documents sent to the club by Messi, effectively giving his notice, would prove little more than another frustrated power play if Bartomeu resigned.

Balague, though, has emphasized that we are merely surveying the details of the divorce. “This is it,” he explained.

First things first. Messi not only wants to leave, he is thinking where he should go next. He doesn’t see himself at FCB anymore. This is it. He has never been more determined. This is not a negotiation or a power battle (THREAD) pic.twitter.com/r8GKJYytbU

Messi situation was fixable then Barca failed to speak to him personally, refused immediate elections, hired a middling coach, indicated closest teammates were transferable and had his best friend find out through the media he was done. Did they even want to fix it?

🔊 Ramon Planes: “We want to build a team around the most important player in the world” pic.twitter.com/0fDSpM83mE

“He doesn’t see himself at Barcelona anymore. He has never been more determined.

“This is not a negotiation or a power battle. Messi not only wants to leave, he is thinking where he should go next.”

Where he will end up depends on the terms of the settlement. Barcelona believe that the clause date is set in stone, heralding an unedifying legal battle that would see the likely-mutinous captain stumble on until the end of next season.

Messi’s representatives, meanwhile, are arguing that the break in play enforced by the Covid-19 pandemic means the window of opportunity for him to leave will last until the end of August, allowing any club to come in for him for the mere price of his basic salary of around $123 million.

All of which leaves his immediate future hanging in the balance, although the possibility of him spending next season at Manchester City is more likely than the continuation, unhappily or otherwise, of the 19-year senior career he has spent at Barcelona since joining as an adolescent from Argentinean side Newell’s Old Boys.

You get the idea. pic.twitter.com/lXqxwuqMqf

Given the price difference of around $814 million between Barcelona pursuing or foregoing Messi’s transfer release fee, which would be enforcable if his lawyers cannot make good on their claim, you can understand why the likes of City and Paris Saint-Germain are likely to simply monitor the situation minute-by-minute for now.

As recently as the end of last month, Inter chief executive Giuseppe Marotta, one of the figures currently scrambling to project the financial plausibility of signing Messi, described the idea as “fantasy football”.

Everyone had assumed that the Messi family’s investment in property in Milan had been little more than personal shopping, another aside for the smoke-and-mirrors conjecture to go with his close previous relationship with City boss Pep Guardiola – now seen as a conspiratorial confidante – and his obvious despair as Barcelona were mauled by Bayern in the Champions League under the hapless Quique Setien.

For all the footage of Messi looking as furious as he was forlorn during that disaster, his detached demeanor was deemed at one with a figure personifying his club in crisis rather than seeking to sever his ties to it.

Now the player who has so often made the seemingly impossible happen on the pitch has repeated the trick in the boardroom. A fortnight after a season that seemed like the final curtain for Bartomeu, Messi’s shock plot twist looks more and more like being his final act in Spain. 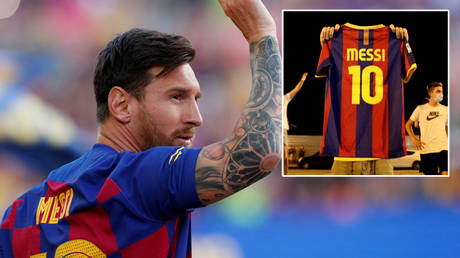