Close
Trending News
HomeSportHe had a ‘face like thunder’: Bruno Fernandes had a ‘rage’ at Solskjaer and his tactics in Man United’s 6-1 thrashing by Spurs

He had a ‘face like thunder’: Bruno Fernandes had a ‘rage’ at Solskjaer and his tactics in Man United’s 6-1 thrashing by Spurs

He had a ‘face like thunder’: Bruno Fernandes had a ‘rage’ at Solskjaer and his tactics in Man United’s 6-1 thrashing by Spurs

Manchester United star Bruno Fernandes was reportedly furious with manager Ole Gunnar Solskjaer and his tactics during the club’s recent 6-1 humiliation at the hands of Tottenham Hotspur.

The Red Devils were put to the sword by Spurs on October 4 as they conceded six goals at Old Trafford for just the second time in 80 years.

According to UK newspaper The Mirror, a United insider said of an enraged Fernandes at halftime:

“You couldn’t help but hear him.

“He was clearly in a rage after having a face like thunder when he raced down the tunnel.

“He laid into team-mates, accusing them of not upholding the proud name of Manchester United.

“He kept yelling: ‘We are supposed to be Manchester United. This shouldn’t be happening.’

“It was clear that the manager also came under fire because he was going on about the wrong tactics.

“There were other raised voices, but his was the one which seemed to carry the main force.”

A United official is said to have denied that an argument between Fernandes and Solskjaer took place, “There was no row. Players often express their views.”

The Red Devils had taken the lead inside two minutes thanks to Fernandes’ penalty, but Tanguy Ndombele and Heung-Min Son quickly hit back and Tottenham were in front just five minutes later.

United’s afternoon got even worse when Anthony Martial was controversially sent off midway through the first half.

After Erik Lamela threw an arm into his face, the Frenchman retaliated with a gentle slap on the Argentinian. Only Martial was sent off, when it seemed that either yellow cards for both players would have sufficed or they should have both been given their marching orders.

Harry Kane got on the scoresheet before Son scored again to make it 4-1 to Spurs by halftime.

It’s understandable at that point that Solskjaer wanted to take an attacking player like Fernandes off in a bid to shut up shop with defensive reinforcements, but they could have done with the Portuguese playmaker’s fire in the second half.

Despite Solskjaer’s efforts to make United more secure, they conceded twice more after the break to Serge Aurier and Kane.

Fernandes has been one of the Red Devils’ best players since he arrived from Sporting Lisbon in January, contributing 14 goals and 10 assists in 26 appearances. 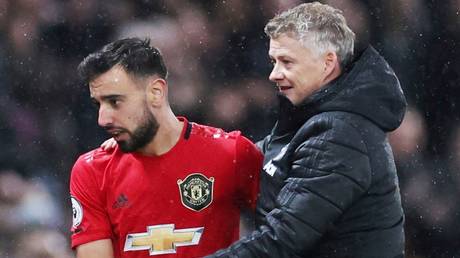