Close
Trending News
HomeSport‘He gonna have to see me’: NFL star brawls with rival who ‘cheated on his sister with a stripper’ while she was pregnant (VIDEO)

‘He gonna have to see me’: NFL star brawls with rival who ‘cheated on his sister with a stripper’ while she was pregnant (VIDEO)

‘He gonna have to see me’: NFL star brawls with rival who ‘cheated on his sister with a stripper’ while she was pregnant (VIDEO)

New York Giants receiver Golden Tate has taken revenge on Jalen Ramsey, the Los Angeles Rams cornerback who cheated on his pregnant sister, by driving him into the turf during a game before launching punches at him afterwards.

Tate had admitted to feeling angry at Ramsey before the NFL game, in which he grounded the treacherous three-time Pro Bowl winner after slamming into him during their meeting on the pitch.

The scorned star was still clearly furious at Ramsey after the final whistle sounded, forcing a mass brawl as both teams tried to stop him from trading punches with the man who ditched his sister, Breanna, while they were expecting their second child together last year.

Ramsey, who regularly posts doting messages to his daughters on an Instagram page followed by more than 1.1 million accounts, appeared to confirm his relationship with Las Vegas dancer Monica Giavanna when he posted a photo of himself with his head on her neck shortly after the scandal broke.

Jalen dumped Tate’s sister who was pregnant with their baby last year
pic.twitter.com/gE9At35ijD

He know he gonna have to see me.

“he going to have to see me “-@ShowtimeTate well I think he saw you https://t.co/7CEfH3g48M

He has since deleted the post and is thought to have ended his brief fling with her, but Tate reacted to the news at the time by telling fans: “He know he gonna have to see me.”

The pair’s physical clash came almost exactly a year after Ramsey’s jilted lover gave birth to their second child. “I’m not happy at all with the disrespect that he’s shown towards my sister and the things he’s done in the past,” Tate had claimed before his team lost 17-9 to the Rams.

“But I don’t really want to go too much into it.”

The 2014 Super Bowl champion reportedly spent 40 minutes pacing the pitch after the defeat before heading inside to wait for Ramsey outside the Rams’ locker room.

His sister posed in front of balloons with her youngest offspring, Brooklyn Elia, just days before the skirmish, saying she had been “blessed” by the birth.

Ramsey also professed his love for the one-year-old on Instagram, where the committed Christian describes his philosophy as “family first” and his mindset as “embracing my journey and growing”.

“It’s a queen’s first birthday,” he said alongside a photo of Brooklyn Elia.

“A full year of seeing you grow and become more of yourself each and every day has been more than I could ever imagine.

“Lord knows I needed you in my life just as much as your sister. Not only do I need you, but this world needs you.”

Neither player appeared before the media after their argument, and Rams head coach Sean McVay said he had been unsure of the details of the scrap. 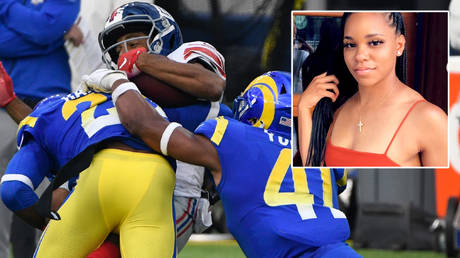