‘He gets $300K a day for speaking engagements’: Khabib manager says UFC champ rakes in MORE than Forbes’ $16.5 million estimate

‘He gets $300K a day for speaking engagements’: Khabib manager says UFC champ rakes in MORE than Forbes’ $16.5 million estimate

Money magazine Forbes underestimated the earning power of UFC lightweight champion Khabib Nurmagomedov when it put his annual earnings at $16.5 million for the past year, according to the Russian fighter’s manager.

Khabib recently topped the Forbes rankings of the ‘most successful’ Russians under the age of 40 from the worlds of sport and entertainment.

The Dagestani star’s income was estimated at $16.5 million from the past financial year up to the end of April, and was combined with an overall ‘popularity’ rating based on aspects including media presence and social media following to provide an overall score.

In topping the list for the second year in a row, Khabib edged out compatriots including the likes of pop princess Olga Buzova and NHL star Alexander Ovechkin.

But according to the UFC star’s manager Ali Abdelaziz, the money men at Forbes were too conservative with his client’s finances.

“This is little bit wrong his speaking engagements 300k per day minimum,” Abdelaziz tweeted, sharing a report on the Forbes rankings.

Khabib’s financial clout in the past year was boosted by his successful title defense against Dustin Poirier at UFC 242 in Abu Dhabi in September of last year, and the 31-year-old Dagestani grappling phenom also boasts bumper sponsorship deals with the likes of Reebok and Gorilla energy drink.

However, the undefeated 155lbs king did miss out on another lucrative payday when his long-awaited match-up with Tony Ferguson fell through yet again in April due to the Covid-19 pandemic.

Another man who would likely query the Forbes ratings is Khabib’s father and trainer Abdulmanap, who earlier this year suggested his son was worth in the region of $100 million. UFC boss Dana White has also described the fighter as “rich as f*ck,” noting the fame and popularity he particularly enjoys on tours of the Middle East and Muslim-majority countries.

Khabib himself has previously spoken about his relationship with money, admitting that he “doesn’t think” the Almighty would be happy he fights for financial gain.

“Everybody likes money… this is not everything for me at this point, but of course money is important,” he said.

“Money can be dangerous too, if it goes inside your mind. But if you have money in your hands, this is good, you can help a lot of people.”

Khabib recently confirmed that he is aiming to return to the octagon in the autumn to defend his title against interim champion Justin Gaethje, who defeated Ferguson after stepping in to fight at UFC 249 in May. 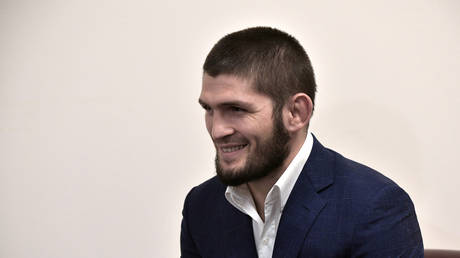