Superflexible Muay Thai master Rafael Fiziev put his supreme suppleness to expert use in a unanimous win over Marc Diakiese on Fight Island, leaving viewers marveling at the dodging that has drawn comparisons with Keanu Reeves.

Fiziev drew comparisons with film star Reeves’ bullet-dodging character in cinema blockbuster The Matrix when he was first seen bending his back at a near-90 degree angle to resist a roundhouse kick in a Muay Thai tournament in 2017, leading UFC president Dana White to share the clip on his Instagram and Twitter accounts, calling it “the craziest sh*t I have ever seen.”

This is the craziest shit I have ever seen!!!!! pic.twitter.com/m1qevc5IE6

The Fight of the Night winner had offered to fight for free in exchange for a UFC deal, but he more than proved his value to White’s roster as fans admired his elusiveness while he walked down Diakiese in Abu Dhabi, battering him with heavy shots in an engrossing scrap.

“Fiziev took the red pill,” wrote one MMA account, referring to the 1999 sci-fi action film. “The boy got skills.”

Fiziev, who has previously told RT Sport that he enjoys the name bestowed upon him by fans and likes to call himself ‘Ataman’ – the title given to Cossack leaders – was also on entertaining form after his win.

Official footage showed him resting in bed before roaring and laughing in delight when he learned he had earned a lucrative $50,000 windfall bonus for the star performance, holding his head in his hands in disbelief as a member of his team congratulated him for his feat.

Fiziev is Neo from the matrix pic.twitter.com/Qg3XfhW63x

Many fans had told White to award the honor to Fiziev when he launched a poll to decide the winner on Twitter, and the recipient described the money as “life changing”.

Thanking Diakiese for a “perfect fight”, Fiziev explained: “I had a plan to break his heart, break his body and show perfect technique – show what I know, you know? I hope people liked it.”

“He looked awesome,” said a suitably impressed White in his post-event press conference. “What a fight.

“You’ve got to give respect to both guys in that fight, man. Some of those shots that were thrown – kicks to the body and…oh my god – it was a great fight. It’s Fight of the Night.” 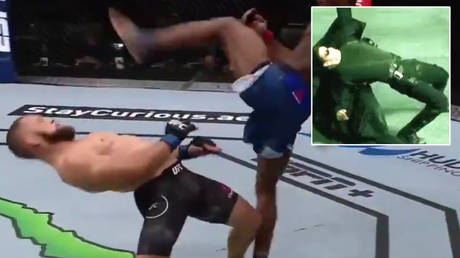 Giant Martian lava caves could be...