Marseilles defender Alvaro Gonzalez says PSG star Neymar “isn’t worthy of his respect” as he slammed the Brazil forward over the racism row which exploded in the aftermath of the meeting between the two teams last month.

Neymar accused Gonzalez of branding him a “monkey son of a b*tch” in PSG’s ill-tempered defeat to  Marseille at Parc de Princes in September, during which the Brazilian was sent off after a VAR review showed him slapping Gonzalez across the head during a mass brawl in injury time.

Neymar’s dismissal was one of five red cards dished out, after PSG teammates Layvin Kurzawa and Leandro Paredes were also sent for an early bath, along with Jordan Amavi and Dario Benedetto for Marseille.

After the game Neymar took to social media to say he had been racially abused by Gonzalez and that his only regret was that he hadn’t “hit him in the face.”

However, Neymar himself was accused of using a homophobic slur to Gonzalez as well as racially abusing Japanese Marseille player Hiroki Sakai.

Both Neymar and Gonzalez were eventually cleared of the claims by the Ligue de Football Professionel (LFP), but the Spaniard still resents the allegations made against him and has accused Neymar of arrogance.

“Neymar told me he won in one day what I earn in a year, and it’s true. I told him I was very happy with my salary,” he told Onda Cero, as reported by goal.com.

“Neymar’s whole game that day was unfortunate, full of provocations.

“I did not make any racist insults, I will not allow my football career and myself to be humiliated.

“Neymar deserves nothing from me, neither my respect nor anything.

“We had a bad time [after the scandal], not just me, my family and more. If I had said anything [racist] to him, it would have appeared on all the cameras.”

But Marseilles center-back Gonzalez accused the big-earning Brazilian of sour grapes at what was a rare domestic defeat for the all-conquering PSG.

“I was superior to Neymar in this match, he was helpless that day,” he said.

While lighting up the French league with his flair, Neymar has consistently been accused of demeaning his opponents by showboating in matches.

He was last in action for PSG on Friday, scoring twice as they thumped Angers 6-1 to record a fourth win in a row and put two shock opening defeats behind them. 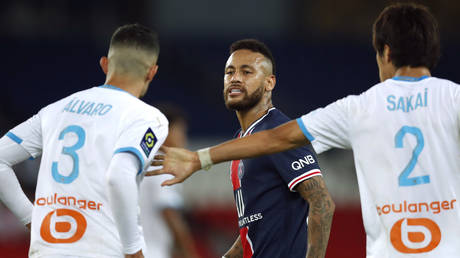 From midfielder to midwife: Brazil...