Daniil Medvedev bagged himself $1.56 million for a week’s work in London as he took home the ATP Finals title on Sunday, but observers including Andy Murray were shocked at the lack of celebration from the Russian and his coach.

Medvedev stormed back from a set down to defeat Austrian world number three Dominic Thiem at the O2 Arena in the UK capital, winning  4-6 7-6 (7-2) 6-4 to clinch the biggest prize to date in the 24-year-old Russian’s career.

But the response on sealing match point was not what many had expected from the often fiery Medvedev, who barely made a sound as he approached the net to clasp hands with the beaten Thiem.

Medvedev did eventually show a clenched fist to the camera, but watching on from the near-empty stands – where a minimal number of support staff were present, but no fans were permitted due to Covid-19 restrictions – the Russian’s coach Gilles Cervara also seemed strangely subdued.

The scenes became even more surreal as Medvedev waited for the trophy ceremony, remaining slumped in his chair and calmly scrolling through his telephone as if he’d just finished a training session rather than adding the most prestigious trophy yet to his collection.

The strange atmosphere was picked up on by three-time Grand Slam winner Andy Murray, who along with fellow professional Gael Monfils was joined by Medvedev for an interview on their Twitch stream after the match.

Murray said he had been expecting a roar of celebration from Medvedev when he clinched the third set and the match, but was left surprised.

“He didn’t react, he didn’t do anything!” Murray joked of Medvedev.

“I was expecting something. And then even after the match they went into the crowd and they showed your coach, and it looked like he didn’t give a sh*t, like you’d just won in the first round of the Futures [tournament]. I was like, ‘what’s going on here?’”

A laughing Medvedev assured the pair that he had been smiling underneath after “the best victory of my life.”

“My coach can have emotions, but I think they maybe turned the camera when it was the wrong moment,” Medvedev said.

“But also when I don’t have emotions, it’s tough for him. He’s alone there [without a crowd], and he will not be screaming alone.”

Medvedev earned a reputation as a budding bad boy of tennis when he waged a running war with the US Open crowd on his way to the final at Flushing Meadows in 2019, but was calmness personified in London on Sunday night, even when he was up against it in the first set and for much of the second.

“It started last year at the US Open more or less when I had some problems with the crowd. I think every player at one moment in his career decides maybe one thing special he wants to do [with his] tennis, something like this,” Medvedev explained of his new persona.

“I know how to keep my emotions, not all the time, especially the bad ones are tough to control. But I know how to control them and [that] lets me [do] this thing.

“They showed the 12 winners of the London [Nitto ATP] Finals. Everybody was lying on the ground, crying, screaming. And me they couldn’t even show the celebration.

“They just showed how we shook hands… if they would just show me walking, it would be stupid. In a way, it’s special. I know it’s not in any way cocky, I don’t try to be cocky or anything. But [it’s] just my style that I will keep for all my career.”

The bizarre non-celebration was followed by a no less odd trophy ceremony during which both Thiem and Medvedev were cut off by music and an overly eager presenter.

Medvedev got cut too. This is ridiculous lol

Medvedev’s victory capped a flawless week in London after he won all three group-stage matches – including against world number one Novak Djokovic – and then came from behind to beat 20-time Grand Slam winner Rafael Nadal in the semi-final.

His efforts earned him “undefeated champion” status and a cool $1,564,000 in prize money.

The Russian world number four also became the first man in the 50-year history of the tournament to defeat the world’s top three on his way to winning the title.

Daniil Medvedev is the first player in the history of tennis to beat the world #1 (Djokovic) #2 (Nadal) and #3 (Thiem) to win the Nitto Atp Finals.

Incredible week from Medvedev. One of the most impressive title runs I’ve seen here in London for some time. Beats top 3 players in a row for the trophy. Adaptation remains his biggest asset, changing up losing patterns with unconventional but brutally effective tennis.

Medvedev is definitely : The Cat.
Whatever the situation, he always finds a way to fall back on his legs.

As the Finals leave London after a 12-year stay in the UK capital, heading to Turin in Italy for 2021, there was symmetry in Medvedev’s triumph as he matched countryman Nikolay Davydenko – who was the first winner of the title when the event moved to London in 2009. The pair are the only Russians to win the season-ending title. 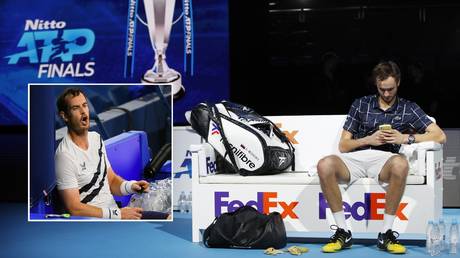 Shock and mourning as South Africa...