‘He didn’t break the law’: Russian football ethics official backs player ‘who was dropped by US team after refusing to take knee’

‘He didn’t break the law’: Russian football ethics official backs player ‘who was dropped by US team after refusing to take knee’

A Russian football official has backed Russian-American player Valeri Saramutin, who has suggested he was dumped by US team Austin Bold partly because he refused to join the ‘take a knee’ protests.

Saramutin, a US-born former Russia youth international, has claimed figures at the USL Championship team sidelined him after he declined to join the BLM protests on the pitch during the summer.

According to the 25-year-old midfielder, he was told he needs to “think about his behavior” but answered that he saw no reason why he should take a knee.

READ MORE: Russian football ace says US team AXED him after he chose not to take knee for Black Lives Matter

Commenting on the situation on Russian radio, the head of the ethics committee of the Russian Football Union, Andrey Sozin, offered his support to Saramutin.

“Some people believe in their god, others [believe] in another god, but they don’t punish people for that,” Sozin said.

“When [Saramutin] expressed his position and didn’t take a knee, he didn’t break the law. It seems to me they’re just going too far with it.

“I assure you that two-thirds of the population of Europe, not black people, I think would support this footballer.”

The football official added that Saramutin may well end up playing back in Russia.

“I don’t want to offend this player, he’s unknown in Russia. But if he played in America, I think he attracted attention with this gesture,” he said.

“I wouldn’t be surprised if he ends up in Russia, but I’m afraid [it won’t be] in the Russian Premier League. I think this is a contrived situation in America, they rock the boat on purpose.”

From Russia with Love.

Austin Bold midfielder Saramutin said he had been fine with the protests taking place in football, but thought participation should be “optional.”

“I am fine with what is happening in America but I think in the summer this situation began to be exaggerated. Before the matches, everyone would kneel down, [which would be] OK if it was optional,” he told Sport Express.

The footballer also said issues had arisen between US second-tier club Bold and players over a potential pay cut due to the Covid-19 crisis, with Saramutin among what he says was a majority who refused to have wages reduced.

Saramutin – who began his career in Russia with Dynamo Moscow before moving back to the US in 2019 – last played for the Texas club when he came on as a late substitute for their game against Oklahoma City at the end of August.

That was a game before which he also didn’t take a knee, and which saw a row between club captain Kleber and the Bold management after the veteran was substituted.

According to Saramutin, he was the only player to support his Brazilian teammate, who he says was later suspended.

“I was also suspended after that game, but only from matches. I continued to go to training…[they] talked to me as if nothing had happened,” Saramutin said.

“No fines were issued – the coach explained to me that I wasn’t physically ready to play. But that was nonsense: around the same time, Bold signed a player who hadn’t played for about a year, and he immediately began to get into the squad.”

Saramutin returned to Russia after the USL season ended last month and still has a contract with Bold, although the situation has been complicated by a lack of clarity over when next season will start.

“I hope that everything will be settled in December. I’m not ready for another year just to train without playing games.” 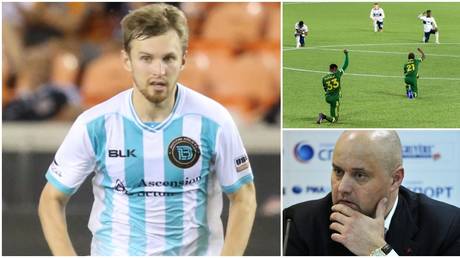