‘He dealt with it in a brave way’: Novak Djokovic talks about ‘deja vu’ moment after hitting linesman at French Open

‘He dealt with it in a brave way’: Novak Djokovic talks about ‘deja vu’ moment after hitting linesman at French Open

World number one Novak Djokovic has talked about accidentally hitting a line judge again during his French Open fourth-round clash on Monday, reviving memories of his disqualification from the US Open last month.

The Serbian star sealed a place in the tournament quarterfinal by beating Russia’s Karen Khachanov in straight sets.

However, his solid victory was not the main topic during the post-match press conference as journalists bombarded him with questions about an awkward moment involving the linesman, which mirrored the incident at Flushing Meadows.

Back then, the 17-time Grand Slam winner struck a ball in frustration, accidentally striking a line judge in the throat. It ultimately resulted in Djokovic’s disqualification from the tournament.

Monday’s episode differed from the US Open controversy, as the linesman was hit as a result of an unexpected ricochet. Djokovic had attempted to return Khachanov’s serve when the ball hit the frame of his racket and struck the judge on the head.

The player immediately ran to check the judge’s condition, apologizing for the awkward incident.During the subsequent press conference, the 33-year-old hailed the linesman for his brave behavior, adding that he felt sorry for inadvertently hitting him.

“My gosh, it was very awkward deja vu. I’m actually trying to find the linesperson and see if he’s OK because I saw he had a little bit of a bruise, like redness, in that place in the head where the ball hit him,” he said.

“I hope he is fine. I mean he definitely dealt with it in a very strong and brave way. But it was a hit because I was very close.”

In his press conference at #RG20 today, Novak Djokovic was asked about the unfortunate “déjà vu” moment where the ball ricocheted off his racquet while reaching for a return and accidentally hit the line judge that was watching the baseline.

Djokovic said he knew people would compare the episode with the US Open disqualification, calling on journalists “not to make a story out of this.”

“Obviously because of what happened in New York, people I guess are going to make the story out of this. It has happened to me and to many other players in the last 15 years that I’ve been on the tour,” he said. 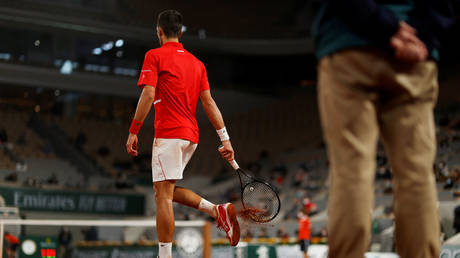