Close
Trending News
HomeSport‘He could have stayed’: Ronald Koeman says Luis Suarez DID NOT have to swap Barcelona for Atletico Madrid in the summer

‘He could have stayed’: Ronald Koeman says Luis Suarez DID NOT have to swap Barcelona for Atletico Madrid in the summer

‘He could have stayed’: Ronald Koeman says Luis Suarez DID NOT have to swap Barcelona for Atletico Madrid in the summer

Barcelona manager Ronald Koeman has said Luis Suarez did not need to leave the club this summer after he moved to Atletico Madrid last month.

Suarez still had a year remaining on his contract at the Camp Nou, but he joined Atletico on a free transfer – although they may have to pay Barca up to £5.5 million in add-ons – after Koeman told him he was not in his plans for the upcoming season.

Despite admitting he had told Suarez as much, Koeman said the Uruguayan could have remained in Catalonia to fight for his place in the side.

He told NOS (translation via Goal), “In the case of Suarez, it had become very difficult for him to start playing and I made that known to him. He found it difficult, but I never had any trouble with him at all.

“He trained normally, trained well. He finally made the choice to leave and I said: ‘If you don’t leave, for whatever reason, then you are just one of the group, then you can prove that I was wrong.’ He could have stayed, yes.

“I’m good with Luis, but the club felt that we had to rejuvenate.”

Suarez was among multiple first-team stars who were offloaded during the transfer window, along with Arturo Vidal, Arthur Melo, Nelson Semedo and Ivan Rakitic.

His exit particularly rankled with Lionel Messi, who is a close friend of the striker’s and who almost left the club himself after handing in a transfer request in the summer.

In an angry Instagram post following Suarez’s departure, the Argentinian hit out at the club and wrote: “You did not deserve for them to throw you out like they did. But the truth is that at this stage nothing surprises me anymore.”

On Suarez’s exit annoying Messi – who as things stand will leave the club for free himself next summer after 21 years of service – Koeman added, “If you have someone in the locker room with whom you and your wife and children also hang out outside football, then such a reaction makes sense.

“I also said that to Messi: ‘I understand that you are disappointed and think it is a terrible shame that he is leaving, but these are choices of the club.’”

Suarez, 33, is no longer the explosive player he once was, and his diminishing pace would often slow down Barca’s attacking play.

However, he remained highly productive in front of goal, and notched 21 goals and 12 assists in 36 appearances last season.

He also netted a brace and contributed an assist on his debut for Atletico, as a reminder to Barcelona of what they’re now missing.

Barca did not recruit another striker in the summer, so aside from Messi their only attacking options this season are Antoine Griezmann and Martin Braithwaite, who inherited Suarez’s No. 9 shirt.

Koeman can also call upon wingers Ansu Fati and Francisco Trincao, but they are just 17 and 20 years old, respectively. 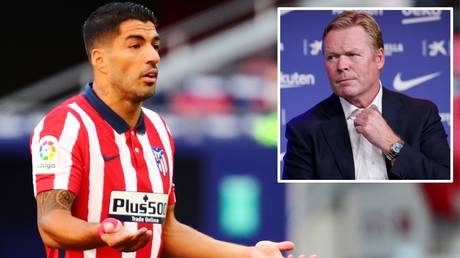