Oleksandr Usyk says Tyson Fury talks a good game and boasts a style which is “successful”, but the Ukrainian claims he can do what no man has done before and beat the giant British star in the ring.

Usyk and Fury currently own all the belts in boxing’s heavyweight ranks, with the former shocking Anthony Joshua in their meeting in London in September to claim the WBA, IBF, WBO, and IBO titles.

Lineal world champion Fury cemented his status with a thrilling knockout win over rival Deontay Wilder in their trilogy fight earlier this month, meaning the Brit kept hold of his WBC crown.

Joshua has activated a rematch clause in his contract with Usyk as the pair are set to meet for a second time in the spring of 2022 – but beyond that, the Ukrainian would not shy away from a showdown with Fury.

“Yes, of course, I do regard this fight a huge one,” Usyk told The Sun when asked if he saw a fight with Fury down the line.

“I see him as a very good fighter, good athlete, he talks a lot, he has a tongue.

“He claims he’s the king of the kings, but it’s only he who thinks that. That’s what I can say about him,” added the two-weight world champion.

At 6ft 9in tall, Fury would tower over the 6ft  3in Ukrainian – who would also give away more than 50lbs to the Brit, based on how the pair tipped the scales for their last fights.

Usyk, 34, dismissed that as being a problem – pointing to the fact that he looked significantly undersized against Joshua before comprehensively outboxing the Brit across 12 rounds.

“Before my Joshua fight everyone was saying that I haven’t got a single chance to win and beat Joshua,” said the Crimean-born star.

“I used to hear those types of things throughout my life, but I am capable of beating Fury because I’m not boasting that I can just punish and beat every boxer in the world, but I just go to the gym and do my job.

“I train hard, I work hard, I put all my effort in. I’m not trying to present myself as the king of the Universe.

“I do what I have to do. I concentrate and I’m focused and I get the result according to my effort.”

Uysk – a former Olympic Gold medalist – is unbeaten in his 19 fights since turning pro, having ruled over the cruiserweight ranks before stepping up in search of bigger challenges.

With his win over Wilder, Fury boasts 31 victories and one draw in his 32 professional bouts.

The Brit’s style and size has often been seen as causing major problems for his opponents – not least Wilder, but also when Fury stunned Ukraine’s Wladimir Klitschko to first become world champion in 2015.

“I can’t comment much on his style because every fighter has his own style according to his own abilities and his own tendencies,” said Usyk.

While Usyk is set for a rematch with Joshua before he can contemplate a unification contest with Fury, the Gypsy King will likely have to take a mandatory WBC title defense against the winner of the bout between Dillian Whyte and Otto Wallin, which was recently postponed due to an injury to the Brit. 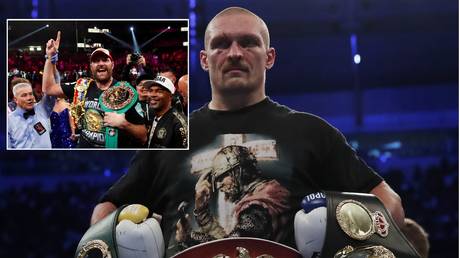