‘He can give Khabib some trouble’: Dustin Poirier predicts tough night for Nurmagomedov when he faces Justin Gaethje (VIDEO)

‘He can give Khabib some trouble’: Dustin Poirier predicts tough night for Nurmagomedov when he faces Justin Gaethje (VIDEO)

Gaethje’s victory against Tony Ferguson last month leapfrogged him ahead of “El Cucuy” to pole position among the UFC’s list of 155lbs contenders and he is expected to challenge Nurmagomedov for the world title at UFC 253 in September.

READ MORE: UFC Vegas 4: Lightweight crowd-pleasers set to light up Las Vegas in a bid to earn a shot at Khabib (VIDEO)

Poirier is in a unique position to be able to offer insight into the matchup, having shared the octagon with both men in the past, and says that Gaethje is more than equipped to neutralize the threats that the dominant champion poses.

If the mooted September title defense does indeed materialize it will mark a year since Khabib’s last fight which, coincidentally, was a third-round submission win against Poirier, whose path to a title shot saw him score a clubbing TKO victory against Gaethje.

And, despite being the victor on that occasion, Poirier predicts that Gaethje could go one better than he did and stamp the first ‘L’ on Nurmagomedov’s 28-0 record.

“I do think that if Gaethje can keep the fight in the middle of the octagon, he can give Khabib some trouble,” Poirier told reporters ahead of Saturday’s main event fight with Dan Hooker.

A big question indeed. No blueprint exists on to how to defeat the Russian, merely techniques designed to limit his grappling opportunities, which lead to many of Khabib’s opponents demonstrating reactionary, rather than proactive, strategies.

Gaethje, though, presents a unique challenge. He is almost certainly the best-credentialed wrestler that Nurmagomedov will have faced in his professional career to date, even if Gaethje rarely displays those attributes in his contests.

Instead, he prefers to engage in often-wild, stand-up battles. They may be potentially hazardous to his health and fighting record, but they certainly haven’t hurt his bank balance. Every single one of his UFC fights to date has earned him a post-fight bonus.

Of course, time will tell how this fight plays out but, as Poirier suggests, it will likely be a closely-contested affair – and an exciting one at that. 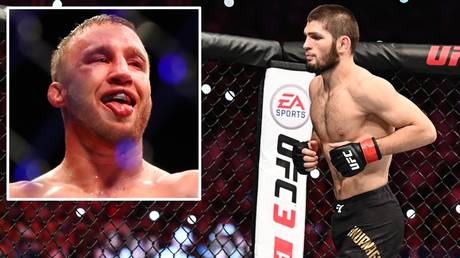