‘He broke my orbital bone with a knuckleduster’: Russian MMA veteran Kharitonov shows injuries from attack by UFC fighter Yandiev

‘He broke my orbital bone with a knuckleduster’: Russian MMA veteran Kharitonov shows injuries from attack by UFC fighter Yandiev

Bruised and battered Bellator MMA veteran Sergey Kharitonov says he suffered a broken orbital bone around his right eye when UFC fighter Adam Yandiev ‘struck him with a knuckleduster’ in an altercation in Moscow on Friday night.

Yandiev was seen attacking Kharitonov on the sidelines of the ‘Battle of Champions’ combat sports event at Moscow’s Luzhniki complex, in a conflict reportedly stemming from a debt owed by Ingushetia-born fighter Yandiev.

Footage showed the two men leaving the arena to talk in a cloakroom area, where the 40-year-old Kharitonov stood with his hands in his pockets, seemingly unaware of the brutal attack that would come just moments later.

By the time the pair had been separated by police and onlookers, heavyweight fighter Kharitonov was left bleeding from his face and was later taken to hospital, where he will reportedly remain for at least the next 10 days and undergo surgery to his face.

Speaking from hospital to the Alexander Lutikov YouTube channel, and with one eye fully covered by bruising, Kharitonov claimed that the conflict had stemmed from debts owed by Yandiev, whom he had helped by funding a training camp in Thailand so that Yandiev could escape a feud he had allegedly become caught up in.

Kharitonov also claimed he had helped the 32-year-old on a subsequent occasion, but had then warned friends against lending Yandiev money when the requests became more frequent.

Speaking of the assualt in Moscow, Kharitonov said Yandiev had requested to speak with him outside the arena, and had then directly asked: “Do I owe you money?”

When Kharitonov replied “yes”, the veteran fighter said Yandiev insulted him before launching a vicious two-punch combination which sent the heavyweight stumbling backwards.

The former M-1 and Strikeforce competitor also claimed Yandiev had struck him with a knuckleduster.

“I felt he hit me with something with his left hand. I know he always wore brass knuckles, he always had them with him… He broke my orbital bone.”

Kharitonov said he also suffered a broken nose in the assault and that he would require surgery.

In a message posted onto his Instagram account, in which he shared footage of the assault, the MMA veteran warned that combat sports practitioners should not use their powers outside the cage or ring.

“I want to address all professional athletes. Don’t use your strength outside the gym, only if your close ones or those around you are threatened.

“We train to show the public our strength in the cage, the ring and on the tatami. The scariest thing is when people prepare specially in gyms to commit crimes. Trainers should identify such people and kick them out.

“I am a trained athlete, but in any case ended up in this situation. At least three months [of no] performances, fractures, bruises, etc… learn from the mistakes of others!” Kharitonov warned, somewhat oddly tagging Mike Tyson with the post.

Meanwhile, middleweight fighter Yandiev – who boasts a 9-1 professional MMA record, and whose sole defeat came in his one and only UFC appearance to date back in September of 2018 – issued an Instagram post of his own to his 1 million followers, vowing that he would set the record straight.

“There will be a full interview, where [I will talk] from beginning to end about my relationship with this character,” wrote the fighter nicknamed ‘Beard’.

“About the conflict that happened between us. It’s all with the facts, the evidence. You’ll find out tomorrow. Please don’t write nonsense and heresy from the words of this liar. A little patience.”

Kharitonov is one of the best-known and most colorful combat sports characters in his homeland. A veteran of more than 40 professional MMA contests, he has picked up 32 victories in promotions including Bellator, M-1, Strikeforce and K-1.

Kharitonov made his boxing debut in September, walking to the ring with a bear before knocking out 47-year-old British veteran Danny Williams. Kharitonov has also made the headlines for calling out heavyweight boxing legend Mike Tyson as well as for some outlandish statements on the coronavirus pandemic.

His conflict with Yandiev came less than a week after Kharitonov knocked out England’s Oli Thompson in the first round of their Parus Fight Championship MMA contest in Dubai. 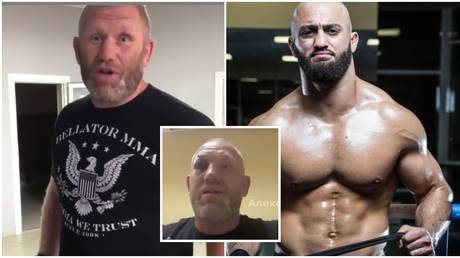