Real Madrid fans have called for ex-Chelsea hero Eden Hazard to leave after he was seen laughing on the pitch after the Blues ousted his current side from the Champions League on an awkward night for Zinedine Zidane.

Belgium playmaker Hazard made a rare start for Madrid at Stamford Bridge, where he shone for Chelsea before leaving for the Spanish giants in a mega deal almost two years ago that could be worth as much as $209 million.

Aside from testing goalkeeper Edouard Mendy in the second half, Hazard was anonymous by the standards he set during his time in London, doing little to prevent Madrid from slumping out of the semifinals with a 2-0 defeat on Wednesday.

Eden Hazard was happy for Chelsea 💙

Worse was to come as footage emerged of Hazard cheerfully congratulating Chelsea players on the pitch afterwards, embracing his opponents at a time when many supporters felt he should have been keeping a low profile after a drab display from the 13-time winners and his latest underwhelming showing in a hugely underperforming spell in Spain so far.

“Eden has to play,” coach Zidane said afterwards, facing pressure over his questionable tactics and the decision to field a player who has provided no assists and only three goals in 18 appearances this season. “He has to regain his confidence, little by little, by playing.”

❗️| “Hazard at the end of the game is unacceptable. We are angry, we don’t understand him. He can not stay at Real Madrid for another second.”@elchiringuitotv

Eden Hazard walking into the Chelsea dressing room after the match pic.twitter.com/ei1rbVvxe0

Club legend Sergio Ramos was making an even rarer appearance, although his out-of-sorts performance fueled rumors that he was unfit and had played on the basis of Real Madrid’s terrible record without him in crucial matches.

“We played a semifinal and the players were prepared,” insisted Zidane. “If they played, it means that they were prepared. We can be proud of my players. We have tried and we have come this far, one step away from the final.

“Chelsea played a great game and qualified and they are to be congratulated. We can say that they deserved the victory. We tried, but in the end they deserved to win and go through.”

Some angry Madrid fans said their patience with the injury-prone star had ended. “Hazard at the end of the game is unacceptable,” said one.

The Real Madrid Shirt is white. It can be stained by sweat, mud, or even blood but never with shame.

Hazard never understood this before this. pic.twitter.com/kbP5amLIcc

“We are angry, we don’t understand him. He cannot stay at Real Madrid for another second.”

Others compared him to the likes of club icons Cristiano Ronaldo and Raul, who were known for their sacrifices and wholehearted performances.

The number 7 has the utmost importance in the history of Real Madrid..

Hazard must learn what it means to wear this number for the biggest club in the world.. pic.twitter.com/NMetUUzcXN

Zidane has won the Champions League three times with Madrid, but his future could now rest on whether his side can retain their Liga title, with a run of four final league fixtures in two weeks starting on Sunday.

Madrid are level on points with Barcelona and two behind city rivals Atletico, having won two of their last four league matches while drawing the other two 0-0. 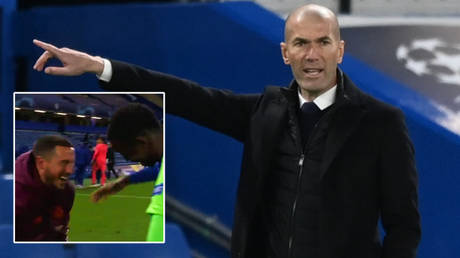 Boris on for a hat-trick of wins i...