UFC heavyweight champion of the world Stipe Miocic defeated Daniel Cormier in the third fight between the pair, then said he wanted his efforts to inspire his daughter after his grueling unanimous decision victory.

Miocic defeated Cormier with scores of 49-46, 49-46, 48-47 on the judges’ scorecards as he outstruck the former two-division champion to retain his title and cement his legacy as the greatest heavyweight champion in UFC history.

But, instead of being happy for himself after his hard-earned win, Miocic said the biggest takeaway from his victory was the lesson he hopes it will teach his young daughter.

Speaking to the media at the post-fight press conference after his win in Las Vegas, Miocic said, “Everyone talks about legacy. The only reason I’m happy to cement my legacy was to show my daughter, to show her that hard work pays off.

“If you do something, you put your mind and effort into it, you can do good things.”

Cormier confirmed his retirement after the fight, and Miocic paid tribute to the man he’d shared the octagon with three times in his last three fights.

“I’ve always had a lot of respect for the guy. I think he’s an amazing fighter (and) I wish him all the best,” he said.

“Amazing ambassador for this sport, great commentator. I never had any animosity toward the guy, no ill will. I wish nothing but the best for the man, honestly.” 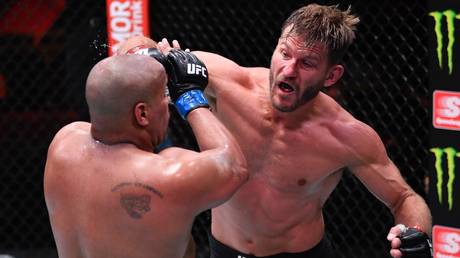