Dern went 3-0 in the UFC octagon last year, getting herself firmly back on track as she aims to put herself into the frame for a potential shot at the 115lbs women’s world title.

The 27-year-old American-Brazilian is set to face the returning Nina Ansaroff in April, in a bout which will pit two mothers against each other.

Dern gave birth to daughter Moa in the summer of 2019, returning to the octagon just four months later and dropping a unanimous decision against Amanda Ribas – to date Dern’s only defeat in her 11-fight pro MMA career.

Ansaroff – who is the partner of two-weight UFC queen Amanda Nunes – will be fighting for the first time since June of 2019 and for the first occasion since giving birth to daughter Raegan Ann last September.

In the meantime, Dern is enjoying some time out in Brazil but is also getting in some training with celebrity friend Lexa.

The Brazilian pop star and dancer posted footage to her 16.1 million followers of herself and Dern twerking together in the gym before engaging in some grappling.

“Today’s training with my friend and muse @mackenziedern. So generous teaching me. She was very friendly, thank you for those days, thank you for your heart,” wrote the singer.

Dern’s downtime has so far included trips to the beach, where she posted a set of smiling images of herself in a bikini last week.

Dern’s last octagon appearance came against dangerous Brazilian Virna Jandiroba at UFC 256 in December, where she won via unanimous decision despite suffering a suspected broken nose in the second round.

Dern has made no secret of her title ambitions, saying after that victory: “I’m very happy with my 2020. I may fight for the belt by the end of 2021.” 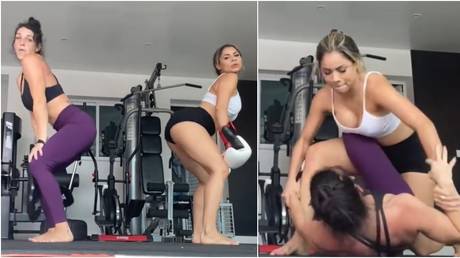 China plans to turn up heat in cra...