Bellator standout Valerie Loureda appears to have the world at her feet as one of the fight game’s rising stars celebrated in her own inimitable way after inking a brand new deal with Bellator MMA.

The undefeated Loureda, who took her professional record to 3-0 with a win against Tara Graff last weekend, has another reason to celebrate after the 22-year-old confirmed on social media that she has signed a multi-year, multi-fight extension to her deal with the American mixed martial arts organization.

The 4th dan taekwondo black belt made her Bellator debut in February last year and has looked impressive in each of her three performances to date.

With Loureda’s win against Graff – or, more specifically, her post-fight victory dance – being viewed more than 11 million times on social media in the week after her fight, it is no surprise that Bellator president Scott Coker elected to lock down the fighter for several further fights.

And, true to form, Loureda celebrated the new contract by posting a video of another celebratory dance after she sealed the deal.

“I am pleased to have re-signed with Bellator,” Loureda said.

“As I have always said, I am here to show the world the true martial artist that I am and chase the flyweight belt. I was born for this, I am a natural-born fighter.”

Furthermore, Loureda’s manager, Abe Kawa, highlighted his fighter’s grit, describing how she was involved in car accident in the days before her fight.

“I know Val is getting some negative comments for her showing emotions after her win,” he wrote on Twitter.

“What you guys don’t know is before she left to Connecticut she got sideswiped and wrecked her car. She also went through a pretty bad few days leading up to that.”

I know Val is getting some negative comments for her showing emotions after her win. What you guys don’t know is before she left to Connecticut she got side swiped and wrecked her car. She also went through a pretty bad few days leading up to that. She still puts on a smile and 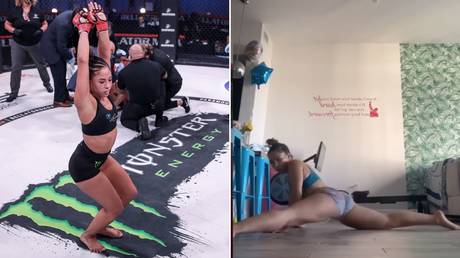