Hand-BRAWL: Women’s handball match in Ukraine descends into chaos as FIGHT breaks out on court (VIDEO)

Hand-BRAWL: Women’s handball match in Ukraine descends into chaos as FIGHT breaks out on court (VIDEO)

A regular game in the Ukrainian women’s handball Super League ended in a mass brawl after a player claimed that a foul against her was ignored by the referee.

The bizarre incident occurred in the dying moments of the match between Dnepryanka from Khesron and Real from Nikolaev, when the hosts were leading 27-24.

The brawl erupted after Dnepryanka’s Karolina Savchenko sprawled right in front of the opponent’s net.

The hot-tempered athlete, who was visibly infuriated by the referee’s silence, decided to punish the alleged offender herself triggering a huge fist fight right on the court.

The conflict escalated into a mass brawl involving players, coaches and staff who were punching and kicking each other for more than a minute.

The on-field battle didn’t affect the course of the game and the match resumed soon after the players calmed down.

Dnepryanka managed to maintain the lead and went on to win 30-28. 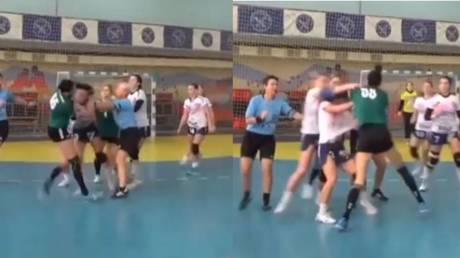