Sedykh showed multiple stitches on his bruised knees which he broke during the ill-fated attempt to make a squat with a 400kg (880lbs) weight.

“Gross alert! I want this day to be a turning point in my recovery. In 10 days the stitches will be removed and it will be easier,” the athlete wrote while sharing the pictures of his severely injured legs.

Sedykh’s legs buckled under the weight of the barbell which he attempted to lift during the European tournament. The powerlifter said he will be forced to spend months in bed before learning to walk again.

“The main thing is that I must lie motionless in bed for two months. Then I’ll be taught how to walk again.

“It’ll take time to recuperate. I’ve had my quadriceps resewn and my knees put back together,” the athlete said. 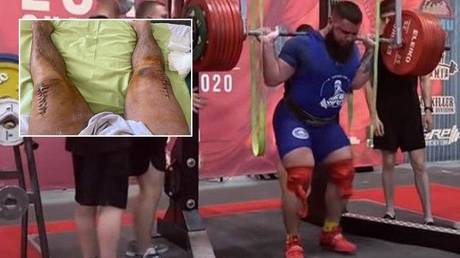