Grin and bear it! TEDDY BEAR goes viral after getting hit with foul ball in baseball game (VIDEO)

Grin and bear it! TEDDY BEAR goes viral after getting hit with foul ball in baseball game (VIDEO)

Baseball’s return behind closed doors has already led to more than a few novel moments on the field but an incident which took place during the game between the Arizona Diamondbacks and the Oakland A’s might just be the best yet.

To combat the appearance of the vast, cavernous stadiums appearing like a ghost town some teams have taken to placing cardboard cutouts, posters – and even teddy bears – into the stands in place of regular, flesh and blood fans, leading to an especially comical moment after a foul ball drive from Diamondbacks second baseman Ketel Marte.

The ball sailed into the stands, connecting flush with one of the teddy bears’ heads – but no harm was done, with a sly grin never leaving the bear’s face.

The incident predictably led to a torrent of social media puns, with one person writing that the bear had the “stuffing knocked out of him“.

A teddy bear took a foul ball right off the head 😂 pic.twitter.com/fEYA7P1LOa

Got the stuffing knocked out of him

We’re happy to report that T. Bear, despite feeling a little stuffy, has passed concussion protocol and will be ready for tonight’s game. His new seat neighbor grabbed a helmet out of his trunk as a precaution.
cc: @MLB @Cut4 pic.twitter.com/XVKBBnhXfA

Another said that he was missing the one “bear necessity” of the sport – a baseball glove.

Fortunately for the bear, A’s president Dave Kaval confirmed that one of the sport’s time-honored traditions will remain intact and the bear will get to keep the ball.

That’ll be something to show off at his next picnic. 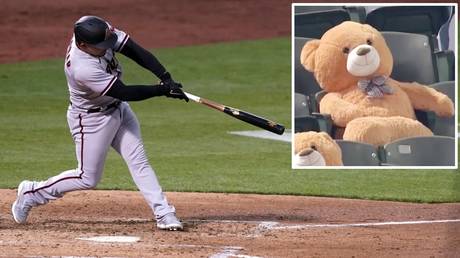 Plane loaded with money crashes in...