Granovskaia relations & absent fans: The reasons to suggest why Chelsea owner Abramovich WILL NOT wield axe with Lampard

Granovskaia relations & absent fans: The reasons to suggest why Chelsea owner Abramovich WILL NOT wield axe with Lampard

Chelsea manager Frank Lampard is facing mounting pressure after a disastrous slump in form for his team, but there are reasons to suggest that the usually ruthless Roman Abramovich will grant him time to turn things around.

Chelsea are languishing in ninth in the Premier League table after picking up just one win in their last six games, and were soundly beaten 3-1 by Manchester City at Stamford Bridge last weekend in a performance which – particularly during an embarrassing first half – has reportedly set alarm bells ringing among Blues bosses.

There were immediate reports that Chelsea officials are considering a potential replacement for Lampard – who stepped into the role in the summer of 2019 – should results not improve rapidly.

As a midfield legend at the London club, Lampard knows full well the demands on managers in the Chelsea dugout, having seen a revolving door of eight permanent coaches come and go during his playing days.

That pressure on Lampard has been added to by a spending spree which saw more than £200 million ($270 million) of new talent arrive at the London club during the summer, including highly-rated German duo Timo Werner and Kai Havertz.

But while Lampard is among the favorites as the next to go in the Premier League sack race, there are causes to suggest that the 42-year-old could be given more time than those before him to turn things around.

RELATIONS WITH THE HEIRARCHY

Lampard’s immediate predecessor, Maurizio Sarri, always seemed something of an odd fit for the club and when he left after just a single season in charge – despite winning the Europa League – few tears were shed among the Chelsea faithful or upper echelons of the club, despite the decision being an amiable and mutual one.

Before that, Sarri’s fellow Italian Antonio Conte departed in much more bitter circumstances, in what was a drawn-out sacking which later spilled into a legal battle where the club were ordered to pay Conte £9 million in compensation.

All the indications are that Lampard enjoys a much closer relationship with Chelsea bosses than either Sarri or Conte – including with influential director Marina Granovskaia.

While Russian owner Abramovich remains absent from Stamford Bridge after his UK visa issues, Granovskaia is the billionaire’s trusted lieutenant along with American chairman Bruce Buck.

Granovskaia, Lampard and performance and technical adviser Petr Cech – a man Lampard knows well from their playing days – worked closely and harmoniously on the club’s summer transfer business, and Lampard has previously revealed it was Granovskaia who initiated contact for him to come in as manager from Derby in 2019.

“When I came back to the club, it was Marina who contacted Derby and then myself to make that happen,” Lampard said.

“I saw Roman on pre-season last year and it was big smiles and not cuddles but welcomes and handshakes.”

Back in July, Lampard said: “I have a very close relationship with Marina and with [technical advisor] Petr [Cech]. That relationship has been really good and that feels like a real strength for me, that I can speak to them regularly and we are joined up about how the club is moving forward.”

The Chelsea board was said to have been “disappointed” by the meek surrender to Manchester City, but the amiable Lampard does at least appear to have more solid relations with the powers that be at Stamford Bridge than those who have gone before him.

That could be key to keeping him in a job long enough to attempt to reverse course and climb back up the table.

Lampard’s appointment as manager was seen as a new approach for Chelsea, building a longer-term project based on talent from the team’s well-stocked academy.

As a young manager, Lampard was viewed as someone who could relate to and nurture that talent, and he has since brought through the likes of midfielder Mason Mount, forward Tammy Abraham and full-back Reece James.

Big-money German duo Havertz and Werner are 21 and 24 respectively, and while both have come in for criticism for their form, they are young and developing not only as players but also in a new environment.

With an average age of 25.5 years old, Chelsea have the fifth-youngest squad overall in the Premier League this season.

‘Patience’ and ‘transition’ have been two of Lampard’s buzzwords since taking over, and he has pointed to the likes of Liverpool boss Jurgen Klopp being given several years for their projects to bear fruit.

Lampard as a manger admittedly doesn’t have the kind of track record that Klopp did when he took over at Anfield, but the profile and age of the Chelsea squad shows a number of key players still at the early stages of their career and still learning how to play together.

That is another mitigating factor in Lampard’s favor when assessing the team’s current malaise.

Such was their abject first-half showing against Manchester City last weekend, it’s safe to say Chelsea players would have trudged off at the break at Stamford Bridge with boos ringing in their ears from 40,000-odd fans, had supporters been in attendance.

Instead, matches continue to be played behind closed doors due to Covid restrictions and the Chelsea players have been spared the jeers and frustrations that would no doubt have accompanied their recent slide and poor performances.

That opprobrium has been found online, but venting from disgruntled fans on Twitter is far less palpable than a stadium full of discontent.

Lampard may well have been spared much of the fans’ ire due to his status as a club legend, but having empty stadiums has at least removed the opportunity for open revolt from supporters over recent performances.

Last season Lampard was credited with surpassing expectations as he guided Chelsea to a top-four spot despite contending with the year-long transfer ban doled out by FIFA for breaches in signing young players.

That gave Lampard some credit in the bank, and he secured passage to the last 16 of this season’s Champions League tournament by going unbeaten in Group G, topping it ahead of Sevilla.

They have a tough assignment across two legs of their knockout tie with Atletico Madrid in February and March, and rocking the boat before then by sacking Lampard might not be seen as ideal as the Blues aim to improve on last season’s exit at the same stage of the competition.

Should they progress in a tie in which they will likely start as underdogs, that would further bolster Lampard’s stock.

As football continues to echo around behind closed doors and the threat of Covid infections still looms, we are witnessing a wild Premier League season in which form has dipped and soared erratically even among the established top clubs.

Manchester United boss Ole Gunnar Solskjaer looked to be precariously placed after his team’s 6-1 home defeat to Tottenham back in early October, only to see a reversal in fortunes which has them joint top of the table with a game in hand over Liverpool.

Jurgen Klopp’s reigning champions have looked ragged in recent weeks and are without a win in three games, and earlier in the season suffered the unforgettable humiliation of a 7-2 rout by Aston Villa.

Pep Guardiola’s Manchester City started the season slowly but are gaining momentum, to the extent that they are regularly tipped as favorites for the title.

Spurs are revived under Jose Mourinho but have also had their wobbles, while Arsenal are rebuilding after a woeful opening to their campaign.

Chelsea’s recent slump of picking up just four points from a possible 18 came after a 17-match unbeaten run which saw them heralded as potential title winners when they briefly topped the table at the start of December.

Lampard was not naïve enough to buy into that talk, and his team’s slide since then has proved him right.

It’s also true that Chelsea’s slide has been condensed into the space of less than a month, such is the congested nature of fixtures this season.

Just seven points separates West Ham in 10th in the table to Liverpool and Manchester United at the top, meaning any team putting together some sort of run can rise rapidly. Chelsea could climb just as quickly as they have fallen.

This is a somewhat surreal season in which each team has faced struggles of its own kind – another factor potentially working in Lampard’s favor.

So, while Lampard will be as aware anyone of the precarious nature of his position and the traditionally ruthless boss he works for, there are at least reasons to point to which suggest he will survive until the end of the season before Abramovich decides his fate. 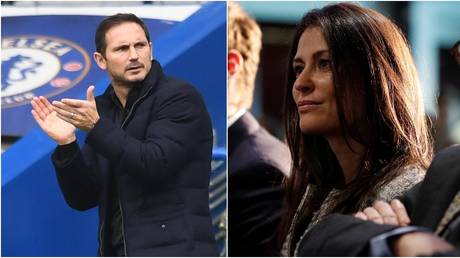