Manchester United have confirmed that Cristiano Ronaldo WILL wear the iconic number 7 shirt after his return to the club in a sensational transfer this summer.

After United unveiled the 36-year-old star in a stunning deal last week, speculation had surrounded whether the Portuguese icon would also be reunited with the famous number 7 shirt he wore during his first spell with the club.

Edinson Cavani had been allocated the number ahead of the season, with the Premier League website confusingly listing both the Uruguayan and Ronaldo as No.7 – with some reports claiming that it would be impossible for United to hand Ronaldo the number due to league rules.

However, the Old Trafford club confirmed on Friday that CR7 wouldn’t need to reconsider his trademark.

“Manchester United can confirm that Cristiano Ronaldo will wear the iconic no.7 shirt after returning to Old Trafford,” the club said in a statement.

“As we all know, the no. 7 is a special number in the history of United,” the statement added.

“It has previously been worn by club icons like George Best, Bryan Robson, Eric Cantona and David Beckham. Now, it returns to the man who succeeded Beckham in it, Ronaldo.”

In a nice touch of symmetry, football statisticians picked up on the fact that Ronaldo would be the seventh player to wear the number seven shirt since he departed the club for Real Madrid in 2009.

Clearing up the mystery of what would happen with Cavani, United suggested the Uruguayan had graciously given up his number to the five-time Ballon d’Or winner.

“Ronaldo inherits the number from Edinson Cavani, who wore the shirt last season and in our away win at Wolverhampton Wanderers last weekend,” said the club.

“As our new signing is allocated no.7, El Matador will switch to no.21, the same number our prolific striker wears for the Uruguayan national team.”

Ronaldo thanked his new teammate for the handing over the number.

“I wasn’t sure if it would be possible to have the number seven shirt again. So I would like to say a huge thank you to Edi [Cavani] for this incredible gesture,” he was quoted as saying on United’s in-house TV channel.

During his first spell at United between 2003 and 2009, Ronaldo helped the club to a hat-trick of Premier League titles as well as the Champions League – picking up his first Ballon d’Or along the way.

The prolific Portuguese struck 118 goals in 292 appearances, a tally he will be sure to add to now that he is returning to his former stomping ground.

Ronaldo has cited the influence of former manager Sir Alex Ferguson in persuading him to opt for a United return from Juventus, after the star was said to be on the verge of joining bitter crosstown rivals Manchester City.

Ronaldo is set to join up with United early after leaving international duty with Portugal, having picked up a yellow card in Wednesday’s last-gasp win against Ireland, ruling the skipper out of the game with Azerbaijan.

The yellow card came when Ronaldo whipped off his shirt in celebration at scoring an injury-time winner against the Irish.

That was his second late goal of the game, having earlier scored in the 89th minute to break the all-time international goalscoring record and move onto 110 goals for his country.

That tally became 111 with his 96th-minute winner. 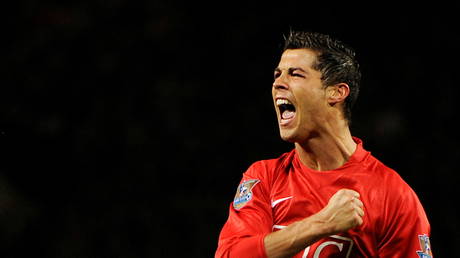 ‘This is ridiculous’: Ronaldo...

‘This is ridiculous’: Ronaldo receives mockery for trumpeting his latest hat-trick… scoring against 94th-ranked Luxembourg again