Close
Trending News
HomeSport‘Good replacement for when I retire!’ Russian swimming champ Efimova on her shock defeat to 16yo star

‘Good replacement for when I retire!’ Russian swimming champ Efimova on her shock defeat to 16yo star

‘Good replacement for when I retire!’ Russian swimming champ Efimova on her shock defeat to 16yo star

Russian swimmer Yulia Efimova has commented on her unexpected loss to 16-year-old prodigy Evgenia Chikunova, who beat her in the women’s 100m breaststroke final at the Russian nationals.

The three-time Olympic medalist, who is getting ready to compete at the upcoming Tokyo Games, said she is pleased that the next generation of swimmers is snapping at her heels, which means there will be a good replacement in the team after her retirement.

The 29-year-old, who has taken part in three Olympics, has never showed extreme speed at local competitions, preferring to peak at major sports events, such as world championships and summer Games.

The swimmer came to Russia to take part in the national selection to earn a place in the Olympic squad.

“I didn’t tell anyone, but initially I didn’t want to participate in the Russian championship,” Efimova revealed.

“Because I was sure that my physical shape would not allow me to give a decent performance.”

“But I managed to improve results [over] three months, so I think in a couple of months I will be in a good shape,” she added.

Talking about her rivalry with young star Chikunova, the swimmer expressed her hope that the promising athlete would be able to become “the second Efimova” in terms of results achieved during her swimming career.

“That’s great that we have competition inside the team, especially when it’s time for me to retire. This means we have good replacement. I hope that Chikunova will become the second Efimova, or even better,” the six-time world champion said. 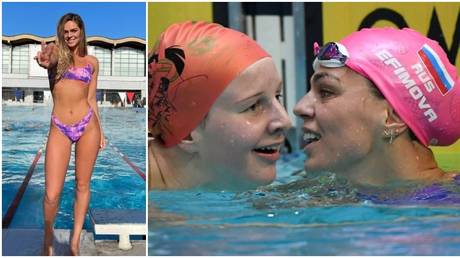