Barcelona captain Lionel Messi will not travel with the squad for their Champions League Group G game against Dynamo Kiev in Ukraine on Tuesday, manager Ronald Koeman has announced.

Messi was distinctly below par in Barcelona’s 1-0 defeat at Atletico Madrid in La Liga on Saturday, which has left the Catalans with their worst start to the domestic season in 25 years.

Things have been better in Europe, where Barca have picked up three wins from three in the Champions League, including an impressive 2-0 win away at main group rivals Juventus.

Last time out the Catalans edged past Dynamo Kiev 2-1 at the Nou Camp, thanks to an early Messi penalty and a second-half Gerard Pique goal.

The hosts were forced to endure a nervy ending to the match when Viktor Tsyhankov pulled one back for Dynamo 15 minutes from time.

WATCH: Fans rip into Messi after viral clip shows him STROLLING as rival waltzes past in Champions League

The return game takes place in the Ukrainian capital on Tuesday night, but Dutch boss Koeman revealed on Monday that 33-year-old Messi would be rested, as would midfielder Frenkie de Jong.

“We think this would be a good moment to rest them,” Koeman explained to the media.

Messi recently returned from a grueling trip to South America on international duty, where he faced Paraguay and Peru.

Barcelona have something of an injury crisis after Pique hobbled off after one hour against Atletico, with it later being confirmed he had suffered knee ligament damage and would be out for several months.

Full-back Sergi Roberto has also been added to the injury list with a muscle strain which is expected to keep him out for several weeks.

Teenage sensation Ansu Fati is already our for four months with a knee injury, while influential midfielder Sergio Busquets is expected to be out for another week after injuring his knee while on international duty with Spain.

Barcelona have one foot in the Champions League knockout stages after a perfect nine points thus far, putting them three ahead of Juventus.

Their European endeavors have thus far been a welcome break from their toils in La Liga, where they are languishing in 12th in the table, with 11 points from eight games and having suffered three defeats. 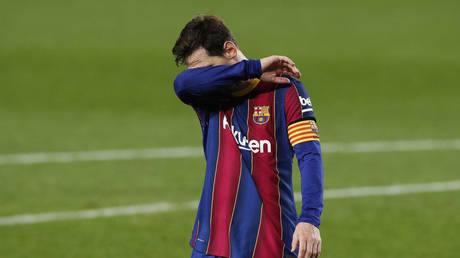