The MMA Festival fight card in Rostov on Don on Friday night featured 11 bouts, but none were as spectacular, or dramatic, as the heavyweight clash between Yuri Kiselov and Timur Magdiev.

The two aging heavyweights went toe to toe in a main card clash that saw 44-year-old Ukrainian Kiselov line up against 52-year-old Russian Magdiev, who was making his first professional MMA appearance in 20 years.

That appearance, as it turned out, proved to be a shortlived, and ill-advised, one as he was knocked out clean by a colossal right hand by Kiselov, who came out of his corner looking to connect with big shots early.

One attempt narrowly missed its target before a second effort connected clean and knocked out Magdiev long before he crashed to the canvas.

The whole fight lasted just 12 seconds, as the triumphant Kiselov celebrated by doing the splits in the middle of the cage. 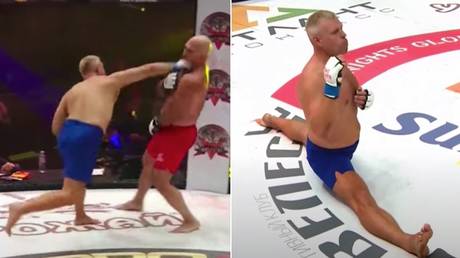