Egyptian grandfather Ezzeldin Bahader is officially the world’s oldest professional footballer after the 74-year-old completed his second full match as a pro.

Bahader’s achievement was officially recognized by Guinness World Records on Saturday event after he played for his team, “6th October,” in their 3-2 defeat to Al Ayat Sports in Egypt’s third division.

Bahader’s achievement was a welcome diversion from his performance as he missed a penalty during the game.

The former amateur player, who turns 75 on Nov. 3, netted from the spot on his debut back in March. He was all set to play in his second 90-minute outing later that month to claim the world record, but the arrival of the COVID-19 pandemic put his quest – and the football season – on hold.

But his appearance this weekend meant he broke the record previously held by 73-year-old Israeli Isaak Hayik.

Bahader’s presence on the 6th October team helped the club earn sponsorship and publicity, and his record-breaking appearance was celebrated by some of his family, with some of his six grandchildren chanting, “Come on, Grandpa!” from the sidelines.

“I dream of being able to break my own record one more time, just to make the competition a little harder,” he said.

But that goal may prove tricky, with Bahader now officially out of contract with his current club. 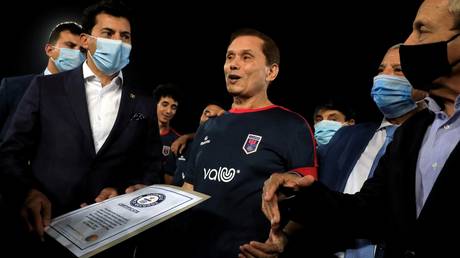 France to ‘strengthen’ control on...

Chelsea include retired 38yo g...