Gianmarco Tamberi and Mutaz Barshim have agreed to share gold after they couldn’t be separated in a thrilling finale in Sunday’s high jump event – a move being hailed by fans as the ‘best moment of the Olympics so far’.

In something of an Olympics rarity, Italy’s Tamberi and Qatar’s Barshim opted to declare that there were two Olympics champions after neither man could complete a jump of 2.39 meters – which would have been an Olympic record – and both had been without error at 2.37 meters.

Tamberi failed in his final bid to break the deadlock, leading the two athletes to consult Olympic officials who offered them a choice: continue competing until one of them makes a mistake or end the competition with two winners.

“Can we not have two golds?” asked the Qatari athlete, a question which was picked up by the television broadcast.

The true essence of sportsmanship.

🇮🇹 Gianmarco Tamberi and 🇶🇦 Mutaz Barshim are approached about a high-jump tiebreaker jump-off… and agree to share the Olympic title.#Athletics #Tokyo2020 pic.twitter.com/HyyJU0MtT3

“It’s possible if you both decide,” replied the official, prompting Barshim to extend a handshake towards the Italian in agreement, which was quickly reciprocated by the overjoyed Tamberi.

The two rivals then shared a dramatic embrace before the delirious Tamberi broke free and sped away in celebration.

Sharing gold medals is an uncommon practice in Olympic history but has now occurred almost 30 times since the inception of the Olympic Games and comes some five years after Simon Manuel of the United States and Canada’s Pennh Oleksiak did the same in the women’s 100m freestyle at the 2016 event.

Best moment of the Games so far. An ‘anti-games’ moment.

Perhaps we’re all too stressed these days for the old ‘winner takes all’ ideology to survive.

“This is the moment that Tokyo Olympics should be remembered for,” wrote one fan in response to the act of sportsmanship between the two rivals. “Absolute class from these two competitors.“

“Word is they’ve already inked a deal with Peacock for an odd couple style sitcom where they live together in a rent-controlled NYC apartment,” joked another.

“Best moment of the Games so far,” added a third in response. “An ‘anti-games’ moment. Perhaps we’re all too stressed these days for the old ‘winner takes all’ ideology to survive.” 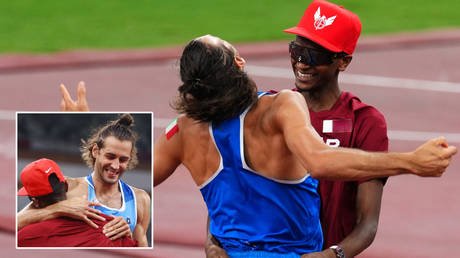 UK accuses Iran of ‘deliberate &am...