Former world champion boxer Oscar De La Hoya has added his name to the lengthy list of fighters to come out of retirement, after ‘The Golden Boy’ confirmed that he will return to the ring at the age of 47.

De La Hoya hasn’t fought since a 2008 defeat to Manny Pacquiao but amid a current trend which has seen fellow boxing legends Mike Tyson and Roy Jones Jr. opt to step back into competition, De La Hoya affirmed his commitment to strap his boxing gloves back on – and he says his comeback won’t be for mere ‘exhibition’ fights.

“The rumors are true, and I’m going to start sparring in the next few weeks,” De La Hoya said via ESPN. “It’s a real fight. I miss being in the ring, I love boxing. Boxing is what gave me everything I have today, and I just miss it.”

De La Hoya, a 1992 Olympic gold medalist, won world titles in six weight divisions in a glittering professional career. The last years of his career saw him come up short in high-profile fights with Pacquaio and Floyd Mayweather but his prime years saw him justifiably considered among the finest ring technicians in the sport.

The years which followed will no doubt have dulled De La Hoya’s weapons somewhat, but he says that he will return in top shape – and perhaps even better than the version we saw in his last pro fight 12 years ago.

“Look, my last fight with Pacquiao, I weighed in at 145 and obviously that was a shell of myself,” he said.

“Look, it’s been a long time, yes,” he said. “But actually my jab feels faster than ever. I have to make sure that my conditioning is perfect, my health is good. And that’s going to take place in the next few weeks. So we’ll see.”

De La Hoya has busied himself with fight promotion since his retirement, even dabbling in mixed martial arts when he arranged the third fight between Tito Ortiz and Chuck Liddell in late 2018. The itch to compete is a tricky thing to overcome, however, and he says he has had enough of sitting on the sidelines – and particularly when he surveys the scene of modern boxing.

And as for the identity of his first opponent, De La Hoya says he doesn’t care so long as it is someone worth his time and effort.

“Any top guy, any top guy out there,” said De La Hoya. 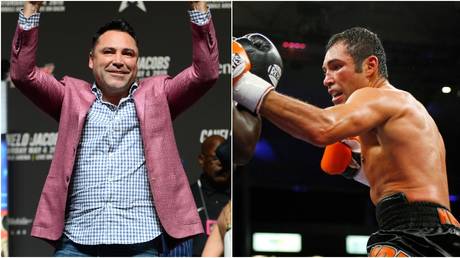