The Russian men’s artistic gymnastics team picked up their country’s third gold medal of the Tokyo 2020 Olympics, winning Monday’s tightly-contested final ahead of Japan and China.

The 2019 world champions, the Russian team of Denis Ablyazin, David Belyavskiy, Artur Dalaloyan and Nikita Nagornyy ended with a score of 262.500 points – a fraction in front of the Japanese team, who finished with 262.397.

China claimed bronze with a total of 261.894 at the Ariake Gymnastics Centre.

The result means the Russian men’s team go one better than their silver medal last time round at the 2016 Olympic Games in Rio de Janeiro.

It’s also the first time since the 1996 Games in Atlanta that Russia have won the event.

The pressure had been on Dalaloyan and Nagornyy on Monday as they completed their floor routines, knowing that the slightest misstep could hand the title to Japan or China.

Somehow returning from tearing his Achilles tendon just three months ago, Dalaloyan continued his remarkable Olympics by producing a solid routine to keep Russia in contention. The 24-year-old Nagornyy then nailed a score of 14.666 to put Russia top of the leaderboard.

On hearing that they had been crowned Olympic champions, the Russian team were overcome with emotion as members collapsed to the floor, hugged and shed tears of joy.

At the time of writing, Russia have four gold, five silver, and three bronze medals, enough to put them third in the overall table behind the USA and China.

Russia are competing under the banner of the Russian Olympic Committee (ROC) at this year’s Games due to a ban imposed by the World Anti-Doping Agency (WADA). 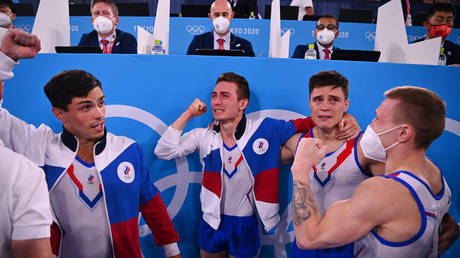 ‘Humans are gonna get fried’: Bask...