Liverpool’s Egyptian king Mohamed Salah says he “loves” life at the Anfield club and plans to remain there for the long term as fans, players and staff revel in a first league title in 30 years.

Salah, 28, has been key to Liverpool’s resurgence since joining them from Roma in 2017 in a then-club record deal which could rise to around £44 million (US$55 million).

The Egyptian goal king has since proved to be worth every penny, so far bagging 92 goals in just under 150 appearances for the Reds.

Salah penned a five-year deal with the club in 2018, but has signaled he is loving life under Jurgen Klopp so much that he could stay at Anfield beyond that.

“I can see people’s joy and this is so important for all of us. I enjoy the atmosphere here… I love this place and I hope to stay for a long time. The atmosphere here is different to any other place.

“We have adapted well as a team and our understanding is perfect. If this continues, we can achieve more. It’s difficult to maintain our current level, but it’s not impossible.”

The statement appears to quash claims by the likes of former Manchester United defender and prominent TV pundit Gary Neville that Salah could be tempted away from Anfield to Spanish giants Real Madrid.

“I said 18 months ago I thought Mo Salah would leave Liverpool,” Neville said back in February.

“I think it’s a little bit more simple in the sense of why Liverpool fans maybe don’t demonstrate that love for Salah, and it’s affinity and loyalty.

“I think there’s a feeling that he wants to go and play at Real Madrid, he’ll go to Barcelona, he’ll take the big move.

Such is Liverpool’s dominance this season that they wrapped up the league title with seven games to spare.

Salah has top-scored in the campaign as part of one of football’s most feared attacking tridents alongside Brazil’s Roberto Firmino and Senegalese star Sadio Mane.

But selecting a player of the season, Salah said Liverpool skipper and midfield grafter Jordan Henderson would be his choice.

“Maybe I’ll choose Henderson because he’s the captain and he’s been here for about eight-nine years,” said Salah.

“He had a difficult time in the beginning and he was heavily criticized. As a captain, he’s loved by all of us and he tries to help all players and helps youth players to adapt.”

Salah and Liverpool will be given a guard of honor at second-placed Manchester City when they meet at the Etihad Stadium on Thursday.

Despite sealing the league in unique circumstances given the Covid-19 pandemic, Liverpool’s title win sparked wild celebrations on the red half of Merseyside as fans took to the streets.

Peaceful celebrations also gave way to more unsavory scenes when fans launched fireworks at the iconic Liver Building on Pier Head, while manager Klopp was among those to urge restraint among supporters. 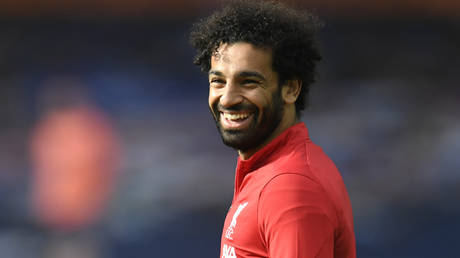