‘Give me the chance!’ With Gilbert Burns RULED OUT, Colby Covington calls for Kamaru Usman rematch at UFC 251 (VIDEO)

‘Give me the chance!’ With Gilbert Burns RULED OUT, Colby Covington calls for Kamaru Usman rematch at UFC 251 (VIDEO)

Following Gilbert Burns’ withdrawal from UFC 251 after his positive COVID-19 test, former interim champion Colby Covington has called on the UFC to draft him in for a short-notice rematch with defending champion Kamaru Usman.

Speaking to Australian outlet Submission Radio, Covington was in typically bombastic mood as he revealed how he learned of Burns’ removal from the event, and explained how he wants to be the man to step in to replace him in Abu Dhabi next weekend.

“I wasn’t surprised. Dirty Dilbert got the ‘rona and, you know, I expected it,” he said.

“What did I tell you guys over the last six, seven months? I said that Jorge “Street Judas” Masvidal was gonna price himself out and he never wanted to fight Marty in the first place, and I said it’s going to be me and Marty rematching, and that’s what it needs to be. So, I’ve been preparing for this.

“What did I tell you guys? I said I’ve been preparing for a short-notice call for the last six, seven months. I’ve been ready for something like this. So now that happened, put the ball in my court. All I need is the ball, UFC, and I promise you I’m running the touchdown.”

Covington says he’s fit, firing and ready to fight on UFC Fight Island next weekend on July 11, and made his intentions clear as laid out his hopes of a short-notice call-up to face the man who stopped him in the fifth round of their first meeting at UFC 245 last December.

“I’m ready to go. I stay ready, I never have to get ready. I live the lifestyle, I’m always in shape, ready to go, so I can jump on opportunities like this. … I will be ready in a short-notice opportunity. So, now, the ball’s in the UFC’s court. I said I’m ready to go, it’s up to them to make it happen.”

Covington also revealed that he had already opened a dialog with the UFC over the possibility of stepping in, but admitted that nothing has been locked in so far.

“There’s been some small discussions – nothing concrete,” he said.

“I think they’re scrambling, they’re trying to figure out what they’re gonna do. But they can’t do, they can’t put ‘Street Judas’ Masvidal out there. The guy’s had the last six months to step up to the fight, and all of a sudden on a weeks’ notice he wants to accept to fight? I mean, we can’t neglect the truth. Jorge doesn’t want to fight. That Shia Labeouf looking motherf*cker, he just wants to go some Spanish island and disappear with some soap opera stars and play dodgeball. He doesn’t want to fight, he’s a clout chaser. So, give the real man what the people want to see.”

On the face of it, Covington would be stepping in on one week’s notice, but the former interim champion doesn’t view it that way. Despite the short lead time ahead of the possible matchup, he says he’ll be 100% ready if he gets the call to step in.

“It’s not one weeks’ notice though,” he explained.

“I’ve been preparing for this moment my whole entire life. The past seven months I’ve been calling what’s gonna happen and I’m gonna stay ready in case something like this does happen. So, I’m ready.

“I’m in the greatest shape in my life. I’ve had the greatest training camp, I feel healthy for the first time in a long time. I’m ready to go, and I’m a professional. So, this isn’t nothing new to me to go through this process and have to jump through the media hooplas and the traveling and the weight cutting. I don’t really cut weight as it is. So, that’s easy for me. This wouldn’t be a problem. We can do this tomorrow, we can go the APEX, fly over to Vegas tomorrow, send over some cameras. I’ll take care of the rest with Marty Fakenesman on a fair playing field.

“You can call me on a Thursday night and I’ll get on a flight. As long as I get there by Friday for weigh-ins, I’m good to go. And that’s the philosophy that I’ve been preaching my whole entire career, my whole entire life, that you stay ready. There’s no shortcuts.

“I’m not looking for the easy road, I want the hardest road possible, because that’s what I excel in. When the biggest pressure is on and highest of stakes is out there, that’s when I thrive and that’s what I’m looking for. You can give me a day’s notice. That’s all I need. I stay ready. Just give me the opportunity, give me the chance, Uncle Dana.”

And if the Usman fight doesn’t materialize, Covington offered an alternative opponent for July 11 at Yas Island.

“I know you’ve been having all those troubles with ‘Street Judas’ Masvidal as well, so if you don’t wanna have troubles with him anymore, just send him my way and I promise you he’ll never give you another trouble ever again.” 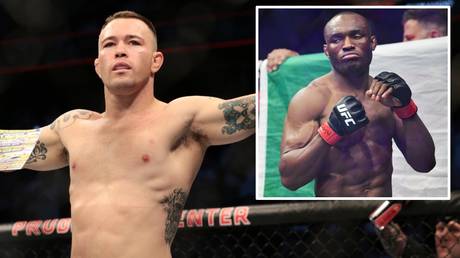 Positive Covid test for US pol...